Kemba Walker getting back into All-Star form is encouraging 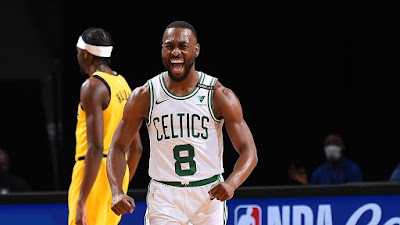 Kemba Walker is starting to get back into All-Star form and that is an encouraging sign for the Celtics, following a 111-110 come from behind win over the Washington Wizards Sunday night.
Boston won two straight games for the first time since Jan. 24 and it also marked the fourth occasion that Walker hit the 20-point mark in the last five tries. The veteran point-guard finished with 21 points on 7-of-17 shooting from the field against the Wizards.
For the month of February, the first full month of action for Walker coming back from his left knee procedure, the Celtics guard scored 20-points or more in seven out of the 12 games played. He averaged 20.3 points, 4.5 assists per game and despite shooting 39.2 percent from the field for the month, he made 38.2 percent of his 3's, which is about what he put up from behind the arc last season at 38.1 percent.
Over the past two weeks, Walker averaged 22.6 points per game, shooting 43.9 percent from the field and 38.1 percent from deep, including a 28-point performance in the Celtics' win over the Hawks on Feb. 19 and a season-high 32 points in the team's win against the Pacers Friday night -- reaching the 30-point mark for the first time in a regular season game since January of 2020.
While the Celtics await the return of Marcus Smart from a calf injury, Jayson Tatum battling fatigue post-COVID and Jaylen Brown dealing with tendinitis in his left knee, Walker is finding his offensive rhythm at the right time as the team has chosen to grow closer, according to veteran Jeff Teague.

"I agree with that," offered Walker on his teammate's claim. "We have definitely grown closer. When times get hard, it's just so easy to separate. The hardest thing to do is come together, and that's what we did. We've got to believe in each other; we're with each other every single day. We see each other more than we see our families. It's a choice we've got to make, and we made the choice to come closer, and we just have to keep it that way."
"There might be some more down times; you never know the way the course of an NBA season goes," he added, "but we're going to lean on us staying together."

Walker is still not playing on the second night of back-to-backs and his rest has proven to be a big reason for a bump in scoring. In the eight games he's played this season after two days of rest, Walker's averaging 20.6 points per-contest while shooting 43.2 percent from the field and 40.3 percent from 3-point range.
The Celtics at 17-17 have lost their last four games that Walker has sat, shooting poorly at 30.3 percent from 3, down from their season average of 36.7 percent from deep. Their overall field goal percentage in that stretch (45 percent) is not much worse compared to their season average (46.3 percent), but has been impacted regardless without Walker in the lineup.
The dip in shooting percentage without Walker could also be explained due to the lack of ball movement. The Celtics do a much better job of passing when Walker is in the lineup than when he's not. Just ask Daniel Theis, who scored 20 points on 8-of-11 shooting against the Wizards and usually has a great scoring performance when playing alongside the veteran guard.

"Kemba's a good playmaker and so are some of the other guys — they get so much attention," Theis said during Sunday's postgame presser. "If we keep moving the ball, it's hard for teams to guard us. I had the wide-open shots and four times in a row they didn't guard me at all. But also, just as a team, if we move the ball, it's so hard to guard us.
"We have Kemba, J.B. (Jaylen Brown), like whoever's out there; we have so many guys who can make plays for each other and that’s what we need. We need to play our brand of basketball."

With two games remaining before the All-Star break, Walker and the Celtics will have a chance to end the first half of the season on a high note and prove they're better than what their current record shows when they host the Clippers on Tuesday and Raptors Thursday respectively.
Joel Pavón
Follow @Joe1_CSP