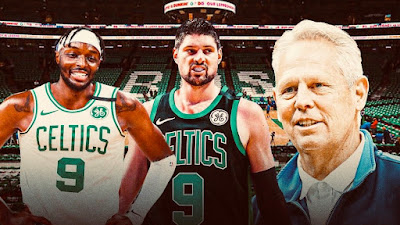 Since acquiring a hefty $28.5 million trade exception from the Gordon Hayward sign-and-trade with the Charlotte Hornets during the off-season, the Celtics have been mentioned in virtually any trade rumor imaginable with players that fit within that cap number.
Most recently, the Celtics have once again been at the center of trade rumors with The Athletic's Shams Charania reporting that Detroit forward Jerami Grant is one of Boston's 'top targets' at the trade deadline, while also mentioning Orlando big man Nikola Vucevic as another potential target.
It's understandable why the Celtics would be interested in acquiring either big man.
Grant is having the best season of his young career on a bargain deal (3 years, $60 million), scoring 23.4 points per game (up from 12 PPG last season), 5.3 rebounds, and averaging a career-best 2.9 assists per game.
Despite the Magic sitting at the bottom of the Eastern Conference, All-Star Vucevic is quietly also having a career year, with splits of 24.6 points, 11.6 rebounds, 3.7 assists, and a career-high 41.2% from deep.
While both players would certainly help the Celtics' depleted roster and are exciting pieces fans are fantasizing over, they're unlikely targets for Danny Ainge at the trade deadline come March 25.
Why Nikola Vucevic is an unrealistic target:
Spending his entire career in Orlando, Vucevic hasn't seen much winning. Now 30 years old and with the Magic currently only 2.5 games ahead of the last-place Pistons, there's obvious reason for the belief Vucevic could be on his way out if Orlando decides to start a rebuild. However, let's pump the breaks on this one.
The Ringer's Kevin O'Connor reported recently that the Magic have "no interest" in trading away Vucevic, which likely shuts down any hope for the Celtics to pull off a deal at the deadline.
Even if the Magic were willing to part ways with their best player, would Boston even be able to make a competitive offer? More importantly, could they make it work financially?
While Vucevic fits in the mold of the trade exception, making $26 million this season and his salary decreasing by $2 million over the next two years, the main hurdle for the Celtics will be fitting under the hard cap. In any potential deal, Boston would need to get creative, either dumping over $6 million in salary in any potential deal with the Magic, or find a another trade partner to shed some salary.
Adding a big man of Vucevic's caliber sounds great for the Celtics, but the Magic will need to get value back as well. That would likely cost a package including players like Marcus Smart, Robert Williams III, Romeo Langford (when healthy), Payton Pritchard, Tristian Thompson (salary purposes), or Grant Williams, including others. Not to mention adding multiple first-round picks to the deal-- which don't hold much value considering they're the Celtics' own unprotected picks.
If the Celtics still view Smart as untouchable, that decreases the likelihood of a deal being completed even more. Boston no longer has protected first-round picks to work with, and don't have a ton of attractive assets at their disposal. Vucevic could potentially be available at the right price, but there are plenty of other teams around the league that could top any Celtics offer.
Why a Jerami Grant Trade won't happen:
As one of the league's best pure "3 and D" players, Grant perfectly fits exactly what Danny Ainge is looking for at the deadline -- "shooting with size." At 6-foot-8, Grant is an excellent defender and is shooting a respectable 36% from three this season. Only 26 years old, Grant is exactly what the Celtics need -- a young big that can stretch the floor, defend in the pick-and-roll, and defend in the post.
Although he is certainly an attractive target for the Celtics, who could use more athleticism in their front-court outside of Robert Williams, the Pistons haven't shown any signs of wanting to move on from someone they just signed this past off-season -- which appears connected to Grant's strong relationship with management.

"Grant’s relationship with [Pistons general manager Troy] Weaver is very strong. It's a big reason why the 26-year-old left a winning situation in Denver to join the rebuilding Pistons. Grant is considered a franchise building block and embodies everything Detroit wants its culture to be moving forward. From all accounts, Grant will be in a Pistons uniform for as long as he wants to be," said The Athletic's James Edwards III.

Taking into account Grant's relationship with the Pistons' management, it's unlikely they'd move on after only half a season with the team. On top of that, Grant left the Nuggets in search of a larger role-- something the Celtics simply won't be able to give him.
Grant would fit perfectly under the trade exception and be a much cheaper option over Vucevic, but it takes two teams to complete a deal. While the Celtics are obviously high on Grant, the Pistons viewing him as a franchise player likely means he’s completely off the table.
With the trade deadline quickly approaching and the Celtics attempting to use their trade exception before it expires this off-season, it makes sense why both players are on the team's trade target list. Both would be great additions for Boston, who have failed to find consistency from their big men since Al Horford's departure. However, considering the cap situation and both players likely being unavailable at the deadline, the Celtics will need to explore other options to improve their roster.
Ian Carrano
Follow @IC_Sports1