Why trade targets Harrison Barnes, Lonzo Ball would be good fit for Celtics 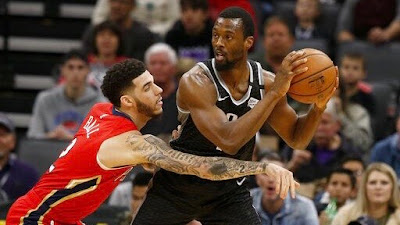 The NBA trade deadline is less than two weeks away and the Celtics are reportedly looking to upgrade their roster for a push through the Eastern Conference playoffs.
One player that has been linked to Boston over the past few weeks is Sacramento Kings forward Harrison Barnes, who's putting up 16.7 points and 6.1 rebounds, while shooting 39.2% from 3-point territory this season.
The Kings have gone into "seller mode" recently after falling to 13th in the Western Conference, according to Sam Amick of The Athletic and a potential Barnes to the Celtics trade could be one that "so many front office folks around the league believe could be coming."
Barnes would give the Celtics some additional scoring, long-range shooting, length, versatility and also championship experience - won a ring with the Golden State Warriors in 2015.
Another player linked to Boston is New Orleans Pelicans guard Lonzo Ball, who's having a career year averaging 14.1 points, 5.2 assists and 4.1 rebounds in 35 games this season -- all starts.
While it doesn't seem like the Pelicans are actively shopping Ball at the moment, but if New Orleans continues to fall in the standings (11th place), look for them to possibly be sellers come March 25 as rumors have be circulating around the fourth year guard.
Ball would add another playmaker and ballhandler to the Celtics second unit and could also play off the ball to just be a shooter or simply a scorer, especially from behind the arc, as he's hitting a career-high 38.1% of his 3's.
Jay King of The Athletic, suggest that though Ball is not the prototypical guard the Celtics are searching for, but he could be an interesting addition for a roster that longs for bench scoring.

"If the Pelicans are willing to part with Ball, the Celtics should at least inquire about him," King writes. "The 23-year-old has some holes in his game, but they wouldn’t matter as much if he could play alongside the Celtics' better creators. Ball could line up next to Walker and/or potentially replace him one day. The idea is intriguing, but on top of whatever assets they would need to ship out in a deal, the Celtics would effectively need to commit to Ball's next contract. That wouldn’t necessarily be prohibitive, but it's an important factor to keep in mind."

With Kemba Walker still on load management for his left knee and Marcus Smart coming back from a calf tear, another guard wouldn't be the worst idea for the Celtics to acquire to attempt another deep playoff run.
As Danny Ainge continues to make those phone calls, the Celtics obviously still have that $28.5 million traded player exception, but it remains to be seen if it will be used or not before the league deadline.
Joel Pavón
Follow @Joe1_CSP