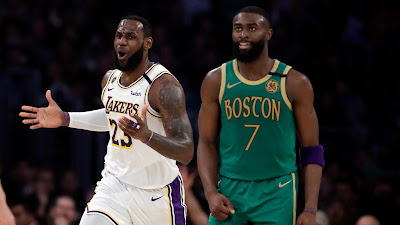 Thursday night captains LeBron James and Kevin Durant picked their All-Star teams live on TNT. Jaylen Brown was selected to Team LeBron, while Jayson Tatum will play for Team Durant.
Before James made his selection of the Celtics wing during the middle of the reserve round, James said "I'll take Jaylen 'Under-Appreciated' Brown," as Durant nodded in approval.
Brown, who's averaging a career-high 24.7 points while shooting 49.5% from the field and 38.8% from behind the arc, raised his eyebrows as a reporter told him of the compliment.

Being regarded as one of the league's best mid-range shooters and two-way players, Brown is having a breakout season. In the Celtics' 132-125 win over the Raptors, the fifth year wing struggled from the field in the first half with foul trouble, only scoring a single point before going off for 20 points -- 11 of them from the free throw line -- in the final 24 minutes.
As for Tatum, who replaced Durant (hamstring) as a All-Star starter, despite playing against his Celtic teammate, he'll also play alongside good friend from his native hometown of St. Louis in Bradley Beal for the first time. Even though they grew up together and attended the same high-school the two have never played on the same roster.

"I was excited," Tatum said in his postgame presser of teaming-up with Beal. "That's what I was hoping for all along. Everybody knows how close we are and the history we have, and it's just a really special moment. Two guys from the same high school, same neighborhood, kind of grew up together, starting in the All-Star game from St. Louis, it don't get no better than that."

The Celtics All-Stars lead the team in minutes, as Brown is in first at 1,082, closely followed by Tatum at 1,072. This mid-season break couldn't have come at better moment with the roster riding some momentum after 36 games and a 19-17 record.

"JB and JT, man, they've been logging a lot of minutes and there's been a lot of pressure on them to carry us for mainly the whole part of the season," Jeff Teague said via his Zoom press conference. "So I think it's a good break for them."

Both Brown and Tatum will also participate in the 3-point contest aside from the All-Star Game. In the spirit of competition, Brown was asked if he and Tatum placed any sort of friendly wager since they'll be on opposite sides come Sunday.

"Hey man, you trying to get me caught up or something?" Brown said, chuckling. "I definitely can't — there will be no official wagers. But with me and JT everything is definitely a competition. So I'm looking forward to competing and playing and sharing the floor. Just tell him don't guard me. That's all I'm going to say."

Tatum, who is averaging career numbers in points (24.9) and rebounds (7.1) this season, said the Celtics being on a four-game win streak gives the team some much needed confidence to build on as they enter the All-Star break.

"It definitely makes going down there a little more enjoyable knowing that we kind of finished off the right way," Tatum said following his 27 point, 12 rebound-performance against the Raptors. "Now going into the break, we can take some time off and enjoy whatever we're doing, enjoy the All-Star game, so for sure going to feel better flying down to Atlanta in a couple of days."

The Skills Challenge and 3-Point Contest is scheduled for a 6 PM EST start, followed by the All-Star Game to tip-off at 8 with the Slam Dunk set to take place during halftime on Sunday night in Atlanta. TNT will have all the coverage beginning at 5 PM EST.
Joel Pavón
Follow @Joe1_CSP