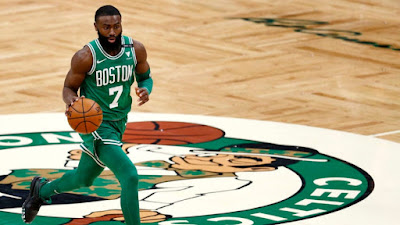 Celtics All-Star wing Jaylen Brown has been listed as questionable for Tuesday night's matchup against the Los Angeles Clippers, with left knee soreness.
The soreness is a result of issues with knee tendinitis that Brown has been playing on for most of the season, which was why he sat out of the Celtics' 111-110 win over the Wizards on Sunday. Danny Ainge revealed that the problem is a chronic one a few weeks ago during a radio interview, the team called Brown "day-to-day" prior to tip-off against Washington.

Brown missed the first meeting between the Celtics and Clippers in a road victory back on February 6, during a five-game West Coast swing.
The former overall No. 3 pick in the 2016 NBA Draft, joins Marcus Smart (calf) and Romeo Langford (wrist) as the only players still on the team's injury report with two games left before the All-Star break.
The Celtics (17-17) host the Clippers (24-12) at TD Garden beginning at 7:30 pm EST on TNT.
Joel Pavón
Follow @Joe1_CSP