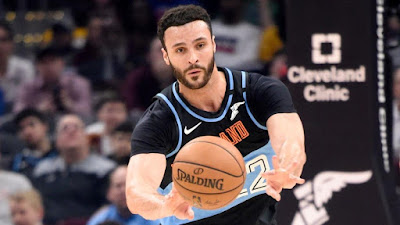 Danny Ainge continues to explore the trade market, as the Celtics reportedly have a target list they keep adding to.
According Chris Fedor of Cleveland.com, Boston is one of several teams that are interested in Cavaliers forward Larry Nance Jr.. The Heat, Mavericks, Pelicans, Sixers and Timberwolves are the others that are showing interest in the veteran.
Nance is averaging 9.3 points and 6.8 rebounds, while starting in 18-of-19 games at the power forward spot this season. The 6-foot-7 forward is shooting 36% from behind the arc and definitely fits the "shooting with size" mold that Ainge has been seeking.
Besides playing power forward, Nance has also played some center during his career. He was traded from Lakers to the Cavs during the 2017-18 campaign as another role player to help LeBron James reach the NBA Finals. He also spent the next two seasons playing alongside now Celtics big man Tristan Thompson.
Nance, who is making $11.7 million this year, could be acquired by Boston in a couple of ways that includes using some of the team's $28.5 million trade exception and it would leave about $17 million still available for Ainge to play with in separate deals.
The Celtics also could simply match salary and trade players to the Cavaliers for Nance. With several players earning between $1.5 million and $3.6 million, Boston could package a few of those salaries to make a trade work. However, there is no report on what Cleveland would be asking in return for Nance.
While the Celtics are also reportedly interested in Pistons forward Jerami Grant and Magic center Nikola Vucevic as "top targets," Nance seems like a more realistic get for Ainge in a potential trade with the deadline quickly approaching on March 25.
Boston has also shown interest in Blake Griffin, who was bought out by the Pistons on Friday afternoon and should clear waivers at some point Sunday.
Joel Pavón
Follow @Joe1_CSP