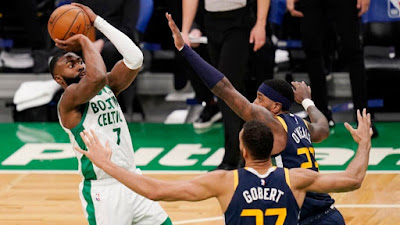 The Celtics once again held their own with one of the league's best teams in the Utah Jazz but, in the end poor late game-execution led to a 117-109 loss at TD Garden Tuesday night.
Despite Jayson Tatum (29) and Jaylen Brown (28) combining for 57 points on 24-of-45 shooting from the field and 6-of-11 from deep, it wasn't enough to stop the Jazz with the NBA's best record at 29-10.
Kemba Walker added 16 points, while Daniel Theis notched a double-double of 15 points, 11 rebounds and Robert Williams III chipped in 14 points, nine boards off the bench for the Celtics, who were without starting center Tristian Thompson (health and safety protocol).
Donovan Mitchell and Jordan Clarkson combined for 41 points and 8-of-15 from 3 to lead a season sweep over Boston for the Jazz.
Mike Conley netted 17 points and Rudy Gobert recorded a 16 point, 12 rebound double-double, while Joe Ingles contributed with 14 points off the bench to hand the Celtics their second loss in three games.

"They're one of the best that I've seen – and I said this before when we played them there – at making the right decision every time," Brad Stevens said after the game. "As good as I've seen in the NBA in my time as far as a team goes at making that right decision."

Boston jumped out to a 16-5 lead -- their biggest of the night -- to start the first quarter before the Jazz hit 10 3-pointers to end the half and had a 54-53 advantage at the break. The Celtics didn't attempt one free throw in the first two quarters, but used an 11-2 run to end the third -- Tatum also scored 12 of his 29 points in the period, as Boston took a 79-77 lead into the final frame.
Utah would respond with a 10-2 run of their own to go ahead 87-81 to start the fourth and stay in front the rest of the game. The Celtics trimmed a nine point deficit down to one with five minutes left and failed to tie when the Jazz led 104-101 following a layup by Brown.
Marcus Smart (2-of-10) missed two 3's on back-to-back possessions after Mitchell hit a 26-footer and Gobert nailed a pair of free throws with less than a minute left and the Jazz up 109-101.
Despite Boston shooting 49% from the field, their second unit was outscored 45-21 by Utah's bench and the Jazz hit 19-of-43 (44.2%) of their 3-point attempts.
The Celtics are now 0-8 this season against the top-five teams with the best records in the league (Jazz 0-2; Suns 0-1; 76ers 0-2; Nets 0-2 and Lakers 0-1).

"There's a reason why the rest of us don't have their record," said coach Stevens. "We don't make people pay as much as they make everyone else pay."

Boston, 20-19 on the season, are heading to Cleveland Wednesday night for a second night of a back-to-back against the Cavaliers (14-25). Tip-off is at 8 PM EST from the Rocket Mortgage Fieldhouse.

Game Notes:
Utah went to the charity stripe 24 times, hitting 22 free throws compared to Boston going 3-of-4 from the free throw line -- matching a franchise record for the fewest free throws made and attempted. The Celtics assisted 28 times on 48 made baskets, as Brown led the way with seven dimes, followed by Theis (six) and Walker (five). Boston outrebounded the Jazz 48-35 and outscored them in the paint 60-36.
Joel Pavón
Follow @Joe1_CSP