Paul Pierce, Bill Russell (as a coach) among Hall-of-Fame finalists 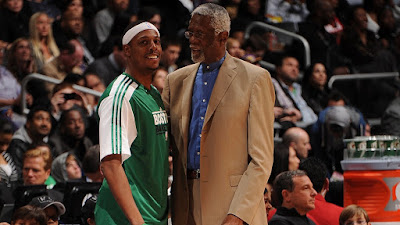 
Rounding out the list of Hall-of-Fame finalists are Leta Andrews, the all-time winningest high school coach, male or female; Michigan's "Fab Five" member and five-time All-NBA forward Chris Webber; 2000 Olympic gold medalist point guard Tim Hardaway; five-time NBA All-Star Marques Johnson and four-time NBA Defensive Player of the Year big man Ben Wallace.
The Class of 2021 will officially be announced on May 16, with the enshrinement ceremony to take place in Springfield, MA. Though there is no exact date, it is to be held at some point in September.
The Hall class of 2020 ceremony, headlined by Kobe Bryant, Kevin Garnett and Tim Duncan, was postponed due to the COVID-19 pandemic and has been rescheduled for May 14-16 in Uncasville, Connecticut.
Joel Pavón
Follow @Joe1_CSP