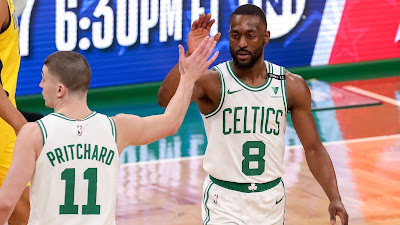 After shooting a combined 13-40 from the field over his last two games, Kemba Walker bounced back in a big way on Friday night, scoring a team-high 32 points (10-19 shooting) in a 118-112 victory over the Indiana Pacers at TD Garden.
With Celtics' All-Stars of Jayson Tatum and Jaylen Brown both struggling on offense combining for 24 points, Boston's 37 bench points, along with Walker carried the load in a must-win game.
Unable to find his rhythm, Tatum shot 4-for-18 from the field, with Brown adding only 15 points (5-of-12) on the night. The Celtics' bigs had a big influence on a bounce-back game, with Daniel Theis tallying 17 points, and Robert Williams erupting with 14 points, 11 boards, and three blocks.
Damantas Sabonis finished with splits of 24 points, six rebounds, and nine assists shooting 7-of-12 from the floor. Myles Turner finished with a 17-point double-double, and Justin Holiday scored 19 points off the bench for the Pacers, who are 15-16 on the season.
Working through a 3-7 record over their last 10 games, Brad Stevens was relieved to see his team come out with a victory.

"It's good to get a win on a day that ends in Y right now. I don't care how we get it or where we get it," said coach Stevens post-game.

Walker's season-high, which impacted his confidence and aggressiveness fueled, the Celtics grind-it-out win with only three games remaining before the All-Star break. Taking notice of his team's cohesion paired with Walker's performance, Stevens was proud to see his team put it all together in a must-win game.

Replicating their recent play, the Celtics struggled right out of the gate, falling behind 18-4. Knowing his team needed a spark, Walker delivered for Boston early, leading a 15-2 run highlighted by back-to-back three pointers. Scoring 10 points alone during the run, Walker's offensive outburst helped neutralize Myles Turner's 13 points in the first quarter.
Also making 10-of-14 free throws in the quarter, the Celtics looked much more aggressive and connected as a unit-- something that was not visible during their three-game losing streak.
With Walker on the bench for the start of the second quarter, the Celtics' second unit, which has struggled offensively, came alive led by an unlikely role player-- Jeff Teague, who also scored 14 points off the bench. Dropping seven points in the quarter, Teague’s offense kept the Celtics afloat with Walker off the floor and their two stars struggling offensive.
Putting his rim-protecting on full display, Robert Williams' three blocks in the first-half also gave the Celtics a much needed boost-- which carried over to the rest of the game. Knowing they haven't contributed much lately, Payton Pritchard was happy to see the second-unit play well on both ends.

"We just came out with energy. Defensive-minded. We just had a talk with the team about just high-energy coming in, being great teammates and that's being reliable. I think the bench unit really came in with a spark tonight. Jeff [Teague] had a big game, obviously Rob [Williams] was tremendous with a double-double," said Pritchard during a postgame interview with Amanda Pflugrad.

Returning later in the quarter, Walker picked up right where he left off scoring another eight points in the second. After lacking confidence in his shot and struggling to make an impact over his past few games, Walker displayed his explosive shot-making ability-- dazzling with his ball-handling and making his signature step-back jumpers.
The Pacers battled back late in the quarter, but the Celtics held a one-point lead at the half behind Walker's 18 points and Boston's 27 bench points-- the most they've had in a half all season.

"We had a slow start, but we stuck together. That was the best part about it. The only way you can get out of struggles is by doing it together," said Walker during his postgame presser.
"Just gotta stay upbeat, stay positive. Hopefully we can continue to play the way we played tonight with some consistency."

The Celtics (16-17) will play the second of their four-game home stand Sunday against the Wizards. Tip- off is scheduled for 7:00 P.M. and will be available to stream on NBC Sports-Boston.

Game Notes:
The Celtics shot 51.2% from the field and held the Pacers to only 39.9% shooting. They also out-rebounded Indiana 45-40 and finished with 24 assists on 42 made field goals.
The Pacers finished with eight steals compared to the Celtics' three. Boston also outshot the Pacers 40.9% to 32.6% from three.
Ian Carrano
Follow @IC_Sports1