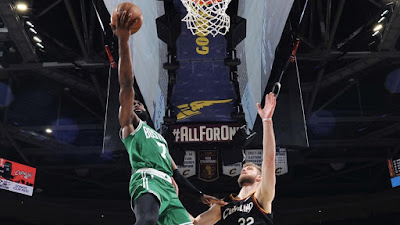 The Celtics jumped out to 2-0 lead; their only one of the night against the Cleveland Cavaliers, before falling behind by 21-points in route to a 117-110 loss at Rocket Mortgage Fieldhouse Wednesday.
Jayson Tatum scored 29 points and Jaylen Brown had 28 points for the Celtics, who were playing on the second night of a back-to-back and are now 20-20 on the season.
Marcus Smart started in place of Kemba Walker and finished with 19 points, while Robert Williams III recorded another double-double of 13 points, 14 rebounds in the loss.

Collin Sexton netted 29 points on 10-of-20 shooting to go along with seven rebounds and six assists to help the Cavs snap a four-game skid. Darius Garland went 9-for-16 from the field to score 25 points and also dish out six dimes. Larry Nance Jr. chipped in 18 points and 10 rebounds for Cleveland, who handed the Celtics their second straight loss and third overall in the last four games.
While Boston played from behind all evening, they got it down to three (96-93) with 5:21 left to play, but that would be as close as they would get after missing their next five shots in a four-minute span and the Cavaliers took full advantage by going on a 11-5 run to close it out.
Cleveland sank 8-of-10 free throws in the final 90 seconds and Isaac Okoro scored seven of his 15 points in the fourth to help the 15-25 Cavaliers snap a nine-game losing streak against the Celtics.
Boston shot just 10-of-38 from the behind the arc, including Tatum and Brown combining for 5-of-25 on 3-point attempts.

"Sometimes, that's the way the game goes," said Stevens about his team's effort.

Robert Williams hurt his knee going up for a lob and retreated to the locker room, but returned to the court midway through the fourth. Stevens said there was some fear of a possible hyperextension and he would be looked at some point on Thursday.
Williams played some extended minutes in the absence of former Cavalier Tristan Thompson, who is the league's health and safety protocol. This would have been Thompson's first game back in Cleveland since leaving as a free agent last year.
The Celtics return home on Friday to host the Sacramento Kings (16-44), who they have beaten 13 straight at TD Garden. Tip-off is at 7:30 PM EST.


Game Notes:
The Cavaliers shot 54.1% from the floor and 43.5% from 3, while the Celtics shot 45.5% from the field and 26.3% from deep. After only getting to the free throws four times in their loss to the Jazz Tuesday, Boston attempted 29 free throws but only hit 20 of them. Cleveland went 27-of-33 from the charity stripe.
Joel Pavón
Follow @Joe1_CSP