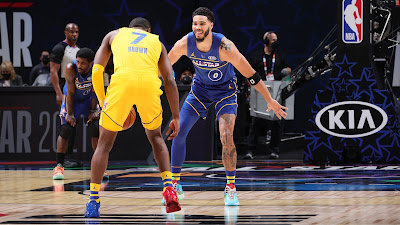 Team LeBron took a huge lead into the fourth quarter in rout of a 170-150 win over Team Durant in Sunday night's NBA All-Star game at State Farm Arena.
Giannis Antetokounmpo was the game's MVP with 35 points on a perfect 16-of-16 shooting from the floor (3-of-3 from 3), breaking a league record for the most shot attempts without a miss in an All-Star game.
Celtics wing Jaylen Brown finished with 22 points on 8-of-12 from the field and 5-of-7 from deep to go along with five rebounds and two steals off the bench (26 minutes) for Team LeBron. Playing in his first All-Star game and being on the winning side against C's teammate Jayson Tatum, it was extra special for Brown for the event to be held in Atlanta, which is about 20 miles away from his hometown of Marietta, Georgia.
Brown just soaked the experience all in, even enjoying watching teammates Stephen Curry and Damian Lillard put on a show from well beyond the arc, as the superstar guards combined for 16-of-32 on 3-pointers

"I've always had the feeling that I belong but to be honest, to watch some of these guys up close is unbelievable," Brown said. "Steph and Dame, I know they didn't win the MVP but some of the stuff they was doing out there was unreal."


As for Tatum, who was playing in his second straight All-Star game, but as a first time starter -- replacing Kevin Durant -- the Celtics forward logged in 17 minutes of action for Team Durant, recording 21 points on 9-of-16 shooting, seven assists, four rebounds and four assists.
Despite the loss, All-Star Sunday far exceeded Tatum's expectation, even with the impact of the COVID-19 pandemic.

"Honestly, it was more fun than I thought it would be," Tatum said in his postgame Zoom conference with reporters. "I had a blast."

One memory that Tatum will cherish is starting and playing alongside childhood friend Bradley Beal, who had 26 points and shot 6-of-12 from 3. It was the first time that the buddies from St. Louis played on the same team and they were even announced back-to-back during the player intros prior to tip-off.

"That was super cool," Tatum said sharing the experience with Beal. "I want to continue to do that. I want to start for the next X amount of years, so I've got a lot of work to do. But sharing that moment with Brad, everyone knows how much that meant to me."


Kyrie and JT throw it back pic.twitter.com/zPVMpIfKlI


The moment Celtics fans were waiting for came in the second quarter when Tatum (defending Brown in isolation) was called for a foul on a play towards the basket. According to Tatum, the referees bailed out Brown on the driving layup attempt.

"No, I didn't foul him," Tatum said after the game. "I was playing defense and he got to the layup and I was about to move out of the way. We in Atlanta, so they gave him the foul."

Tatum joked before the game that he knew all of Brown's moves and that he refused to let his Celtic teammate score on him. Tatum was right and got the last laugh, as Brown missed both free throws and more than likely a 1-on-1 will certainly be on tap in the team's next practice.
The Celtics young duo also participated in the 3-point contest prior to the All-Star game, as they faced eventual champion Curry, Chicago Bulls guard Zach LaVine and Utah Jazz teammates Donovan Mitchell and Mike Conley.
Brown failed to make it pass the first round, tallying 17 points, while Tatum made it to the finals along with Curry and Conley with a score of 25 points.
Tatum went cold in the final round, matching Brown's first round output of 17, as Conley finished with 27 before Curry hit the very last ball as time expired to end up with 28 points after reaching 31 in round one and captured his second career 3-point trophy.
The Celtics at 19-17 kick-off the second half of the season when they face the Brooklyn Nets (22-13) on Thursday night. Tip-off is at 7:30 PM EST on TNT.
Joel Pavón
Follow @Joe1_CSP