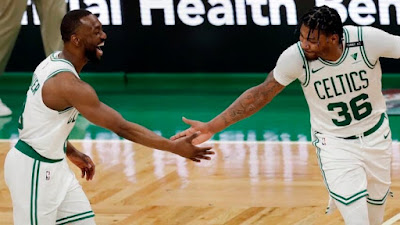 After the Celtics' 107-96 disappointing loss to the Sacramento Kings on Friday night, the team got together to discuss what direction it wanted go in.
Multiple players expressed the desire to succeed this season, but losing to the league's worst defensive team and falling below .500, the decision was made to have a player meeting.

"We just kind of sat in the locker room and we just really self-reflected on each other," Marcus Smart said Sunday during his postgame presser. "We asked each other, 'How we want to end the season? How do we want to be remembered for this season?'"

They all agreed that they wanted to turn things around and that the time is now to figure out how to start winning some games.

"We don't want to look back on this season and be like, 'Damn, we could have did this,'" Smart said. "We still have time. It's not a lot, the margin for it is closing, but we still have time to fix it and that’s what we are trying to do. We all came together and we all agreed that we want to evolve as a team and continue to learn and make each other better."

The Celtics took a step in the right direction with a 112-96 win at home over the Orlando Magic on Sunday afternoon. Jaylen Brown carried his teammates through four quarters, hitting 10-of-18 3's and despite blowing a double-digit lead in the fourth quarter they were able to hold to snap a three-game skid.

"This team has been in a funk in some ways with that stuff, but that's not who they are," Brad Stevens during his postgame press conference. "We've watched these guys play, a lot of these guys play, for a long time. We've seen what they do when their backs are against the wall. We know that there's never been a question with that kind of thing, so you just have to do that as a team if things aren’t going well. When you’re kind of in that funk, stop thinking about yourself and start leaning on each other."

With a tough week ahead, where the Celtics will be traveling on a four-game road beginning tonight against the Memphis Grizzlies, then the Milwaukee Bucks on Wednesday and Friday, with the Oklahoma City Thunder on a second night of a back-to-back come Saturday; it will be a huge test of where this team is mentally and if their meeting had an impact on one another.
Joel Pavón
Follow @Joe1_CSP