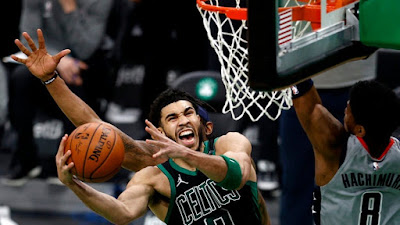 The Celtics once again had no answer for Bradley Beal, but it was Jayson Tatum who won the St. Louis native battle, as Boston beat the Washington Wizards 111-110 at home in their second straight win.
Beal for the second time this season dropped another 40-point performance at TD Garden, scoring 46 on 16-of-26 shooting, but it wasn't enough to hold off the Celtics, as they lost the season series 2-1 on Sunday night.
Tatum hit two driving layups, including the game-winner in the final 15 seconds, to finish with 31 points on 12-of-22 from the field and grab eight rebounds to put bring Boston back to .500 at 17-17.

"I think it's just a feel for the game," Tatum said to reporters of his clutch shots down the stretch. "You use your instincts. I've been playing basketball since I was 3 years old."

Kemba Walker netted 21 points on 7-of-17 from the floor to go along with eight assists, while Daniel Theis added 20 points and nine rebounds for the Celtics who won two games in a row for the first time in over a month.
Russell Westbrook had 24 points,11 rebounds and Davis Bertans chipped in 20 for the 13-19 Wizards, that are now on a two-game skid.
The Celtics trailed 110-105 after a made Beal basket with 47 seconds left before Tatum sliced into the lane and hit an acrobatic shot with 15 seconds remaining.
Beal then turned the ball over after slipping out of bounds near the baseline before a Tatum layup gave Boston a 111-110 advantage with 4.7 seconds left to play.
Washington had the ball and everyone knew it was going to Beal, as the All-Star guard was trapped by Tatum and Semi Ojeleye in front of the Celtics' bench and fired up a jumper from the corner that rimmed out as time expired.
Tatum had a bunce back game after struggling offensively in the previous two with only nine and 13 points respectively.

"Just the person he is, I knew he was going to come back strong," Walker said in his postgame presser. "We just needed to get a basket and JT got some unbelievable baskets. That's the type of player he is."

Walker's 3-pointer from the right wing gave the Celtics a 68-57 lead, the largest of the night early in the third quarter, before Beal scored eight during the Wizards' 12-2 run in the final five minutes of the period. Washington finally grabbed their first lead after an 11-2 spurt to open the final frame.
Beal's four-point play made it 95-94 with just over five minutes left to play. The Wizards' guard followed a basket by Walker with a 3-pointer and had a three-point play, making it 101-96 with 3:57 remaining.
Boston trailed 106-98 after Westbrook's 3-pointer from the left corner with 2:58 to go, but Tatum's fadeaway jumper capped a 7-0 run with 1:34 to play.

"It means a lot," Walker said of the comeback. "Just the way we handled ourselves in the huddle. We showed some poise."

Jaylen Brown sat out with a sore left knee, as coach Brad Stevens said the All-Star wing is listed as "day-to-day."
The Celtics will host the Los Angeles Clippers on Tuesday at TD Garden in the third of a four-game homestand before next week-end's All-Star break. Tip-off is at 7:30 pm EST on TNT.
Game Notes:
Celtics shot 47.2% from the field and 33.3% from behind the arc, while the Wizards hit 45.2% from the floor and 28.1% from 3. Boston assisted 25 times on 42 made baskets and out-rebounded Washington 61-43.
Joel Pavón
Follow @Joe1_CSP