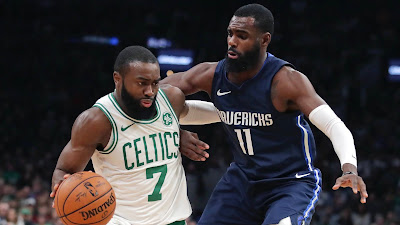 Jaylen Brown will return to the Celtics lineup tonight against the Dallas Mavericks, after sitting out in Monday's loss to the New Orleans Pelicans with a hip injury.
The All-Star was upgraded to available after being listed as questionable 24-hours ago, Brown rejoins his teammates as they play the second of a seven-game homestand.


Romeo Langford was also listed as questionable but will remain out despite no longer being in health and safety protocol, but the Celtics forward is now in post protocol reconditioning. He was seen in shoot around prior to tip-off against the Pelicans on Monday, his return could be as soon as Friday, per coach Brad Stevens. Langford has yet to get on the court this season due to recovery from wrist surgery before being placed into COVID protocol over two weeks ago.

#NEBHInjuryReport Romeo Langford will not play tonight but could be active for Friday night's game, says Brad Stevens.

With Brown back in the fold following his hip injury sustained against the Oklahoma City Thunder Saturday night, the Celtics will have their six best players ready to go with the addition of eight-year veteran Evan Fournier. The former Magic's guard didn't have the best debut on Monday versus the Pelicans, but he should provide much needed wing depth in Stevens' rotation.
While Tristan Thompson remains in health and safety protocol as well, big man Robert Williams III (illness) is also a late scratch for the Celtics, who will tip-off against the Mavs in front of fans once again at TD Garden beginning at 7:30 PM EST on ESPN.
Joel Pavón
Follow @Joe1_CSP