Luke Kornet makes impact in Celtics debut, says 'I was hoping to come in' 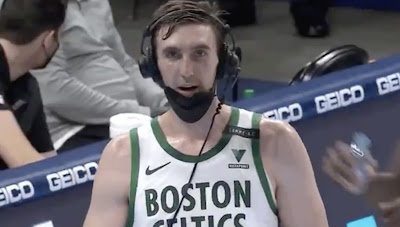 Luke Kornet made quite an impact in his Celtics debut to help rally past the Oklahoma City Thunder 111-94 Saturday night.
The 7-foot-2 center, who was acquired right before the NBA trade deadline, immediately found new teammate Jayson Tatum for a dunk just seconds into the fourth quarter to cut the Thunder's lead 80-78.
Kornet hit his first bucket as a Celtic when three possessions later -- with the score tied 82-82 -- he was wide open at the right elbow behind the 3-point line in transition and let it fly to give Boston their first lead of the night.
On the very next possession and the shot clock winding down, Tatum returned the favor by finding a wide open Kornet at the top of the key and hit another 3 to put the Celtics ahead 88-82, capping a 10-0 run to essentially put away the Thunder for good.
Two days after being traded along with Moe Wagner for Daniel Thies and Javonte Green, Kornet saw his first minutes after being told to be ready by Celtics coach Brad Stevens.

"Coach Stevens told me after halftime to be ready, so I was hoping to come in," Kornet told reporters postgame. "It was a lot of fun just to play with this group. Watching them in Milwaukee, super talented and just good dudes. So, it was fun to be able to get out there and play."

In 13 minutes of action, Kornet scored eight points on 3-of-5 shooting and 2-of-3 from 3, while grabbing five rebounds. But one play that stood out was on the defensive end, following a turnover by Kornet, he got back quickly to force Thunder guard Theo Maledon to make a bad pass at the rim. The play led to a steal by the Celtics for a transition dunk by Tatum to put them up 95-82 with 6:59 left.
Stevens pointed out the defensive play as one of the reasons the Celtics were interested in Kornet, along with his ability to shoot the three and spread the floor on offense.

"The biggest thing with Luke, obviously, Luke is a guy who can shoot the ball," Stevens said to reporters in his presser. "We've also been intrigued with Luke for a long time because of his pick-and-roll defense. His ability, he's always in a good position. He's long. He affects shots at the rim. He's a guy that we've always had an interest in because of those two things."

While Kornet's effort on both ends of the floor don't necessarily show up on the stat sheet, but the newest Celtics big man was appreciative that his coach noticed that type of impact he made.

"I'm not necessarily really going after blocked shots or even going after defensive rebounds, but I'm just trying to make life harder [on the opposition] and secure the ball for our team," Kornet said. "So it's great when you have a coach that kind of picks up on the nuances of what you're trying to do and appreciates it."

With his first game as a Celtic out of the way and the team on a two-game win streak, Kornet is happy to be on this current roster and can't wait to find out what's next to come.

"The last couple of days have been pretty eventful," Kornet said. "Besides a couple hour period of where I realized what was going on, once I got over the [shock] I was just excited to come here. Boston's an awesome place, and a franchise that I've always liked, appreciated, and still watched. So, it's really cool to be here and be able to play with these guys."