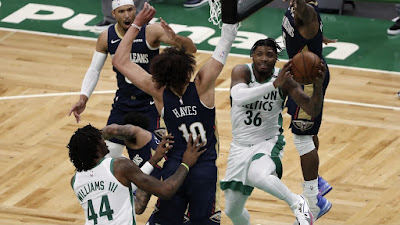 The Celtics fell to the New Orleans Pelicans 115-109 in front of fans for the first time since before the pandemic at TD Garden Monday night.
Considered a sellout, under the state-mandated limit of 12% of the arena's capacity -- 2,298 masked fans were welcomed back after over a year away to cheer the Celtics, plus boo and taunt the referees -- while practicing social distancing, despite the loss.

"Seeing fans occasionally on the road but not here, I'd say it was pretty emotional for me," Celtics coach Brad Stevens said. "It signals maybe if we can buckle down and get through it, we can have something close to normal."

Jayson Tatum finished with a game-high 34 points on 12-of-25 shooting, including 5-of-9 from deep, nine rebounds and five assists to lead the Celtics, who were without Jaylen Brown (hip).
Kemba Walker scored 23 points and Marcus Smart added 15 points, as Boston is back below .500 with a 23-24 record after winning two in a row coming into their first of a seven-game homestand.
Newcomer Evan Fournier shot an historic 0-of-10 from the floor, 0-of-5 from 3 and didn't score in his Celtics debut after playing 33 minutes off the bench, while Luke Kornet picked up where he left off in Oklahoma City, going 4-of-6 from the field (2-of-4 from behind the arc) to score 10 points in 13 minutes of action.
Zion Williamson led the Pelicans (21-25) with 28 points and Brandon Ingram chipped in 25 points, nine assists. Josh Hart recorded a double-double of 15 points, 15 rebounds to help sweep the season series against the Celtics and beat them for the third straight time.
Boston with a 17-point deficit in the fourth quarter, used a 13-0 run to cut New Orleans' lead down to 110-107 with 50.5 seconds left to play on a buzzer-beating Tatum step-back 3.
Ingram responded with 22-foot jumper on the opposite end and that would be as close as the Celtics would get the rest of the way.
Smart picked up a technical foul, followed by an ejection and the Pelicans sank their final three free throws to secure their fourth win in five games after Tatum missed a layup with 25 seconds remaining.
The Celtics led by two early in the third but trailed by five with a minute left in the period. But Williamson's layup to finish the quarter and two more to start the final frame -- gave New Orleans a double-digit advantage while in the middle of a 14-3 run.
The Pelicans had a 110-94 edge with four minutes left before Boston had one more rally but it fell short, as they only got within three with less than a minute to play.
Though they didn't win in their "home opener," the Celtics were happy to have fans back at TD Garden after the state of Massachusetts cleared professional sports teams to admit up to 12% capacity back on March 23.

Boston shot 43% from the floor and 32.6% from 3, while New Orleans hit 50% of their attempts and 51.6% on 3-pointers. The Pelicans assisted 30 times on 41 made baskets to the Celtics 21 dimes on 40 made shots.
According to Stat Muse, Evan Fournier became the first Celtic in franchise history to play the most minutes (33) and go scoreless with 10-plus shot attempts since the 3-point era in 1980.
Joel Pavón
Follow @Joe1_CSP