Grizzlies 132, Celtics 126 [OT]: Ja Morant, Dillon Brooks too much to overcome in Memphis 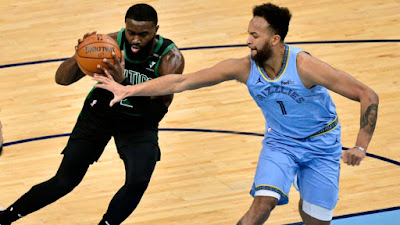 It went down to the wire for the Celtics, but couldn't hold on as they fell to the Memphis Grizzlies 132-126 in overtime at FedEx Forum Monday night.
Boston was already without Kemba Walker (knee management) before Jayson Tatum was a late scratch from the lineup due to illness despite warming up with his teammates prior to tip-off.
Jaylen Brown led the Celtics, who are back below .500 once again at 21-22, with 27 points on 11-of-24 shooting to go along with nine rebounds. Jeff Teague as a starter shot 10-of-12 from the field to score 26 points and Robert Williams continued his stretch of good performances with 17 points off the bench.

"We had this one," Brown said during his postgame presser, later adding: "It's definitely one we want back. We played hard to get back into the game. There's still a lot of stuff we've got the clean up."

Less than 24 hours after a much needed win over the Orlando Magic and several players speaking out about a team discussion that was had on wanting to turn a corner on the season, only for Boston to once again come up short in crunch time.

"When you are missing guys like Jayson and Kemba, you have to win with a better defense," Celtics coach Brad Stevens said. "I think that's what we've been able to do in the past."

Ja Morant finished with a game-high 29 points and nine assists, while Dillion Brooks netted 24 points for the 20-20 Grizzlies, who have won three of their last four. Jonas Valanciunas had a double-double of 16 points and 19 rebounds in the win.
The Celtics trailed by nine midway through the fourth quarter, but then tied the game 117-117 with 7.3 seconds left to play in regulation and sent it to overtime on an alley-oop dunk to Daniel Theis (13 points) from Marcus Smart (16 points).
In the extra period, despite Boston striking first, the Grizzlies used a 10-2 run to go ahead 127-121, as Brooks scored five points during that span. Ja Morant hit 3-of-4 final free throws and the Celtics missed their last 5-of-7 shots the rest of the way.
Boston jumped out to a 13-4 lead to open the first quarter and had a 65-60 advantage at halftime. The Grizzlies outscored the Celtics 31-23 in the third after taking their first lead of the game with 9:26 left in the period and were up 94-86 entering the final frame.
The Celtics got their 10-game road win streak over the Grizzlies snapped and now have lost six straight on second nights of back-to-backs this season. They'll head to Milwaukee to face the Bucks (28-14) on Wednesday night and then again Friday. Both games are scheduled for a 7:30 PM EST start time on ESPN.