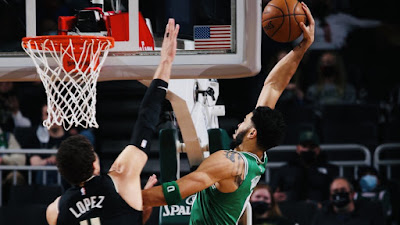 The Celtics beat the Milwaukee Bucks 122-114 and snapped their eight-game win streak Friday night at the Fiserv Forum.
Jayson Tatum scored a game-high 34 points on 13-of-18 shooting, while Marcus Smart netted 23 points on 8-of-15 from the field. Both Tatum and Smart connected on a combined 11-of-17 from deep, as the Celtics hit a total of 22-of-47 3-pointers -- two shy of the franchise record for made 3's.
Kemba Walker had 21 points and Jaylen Brown added 18 points to lead the C's (22-23) to a season series win over Milwaukee 2-1. Boston's core four of Tatum, Smart, Walker and Brown totaled 96 points, the most they've scored since the start of the 2019-20 season.

"It felt good to get a win. A lot of guys played well. Especially after what happened yesterday, losing a couple of my teammates," Tatum said during his postgame presser, in reference to the deadline trades. "So, it just happened to come together today. It was only one win, but maybe this can be the start of something good."

The Bucks at 29-15, struggled from inside the 3-point arc, as Khris Middleton finished with 19 points, Jrue Holiday had 17 points and league MVP Giannis Antetokounmpo was held in check once again to only 16 points on 12 shot attempts.
With a 60-55 advantage at halftime, the Celtics caught fire in the third quarter going 9-of-14 from 3-point territory and scored 43 total points in the period.
Boston entered the final frame with a 103-89 lead and the Bucks waived the white flag after back-to-back 3's made by newcomer Moritz Wagner and Smart to make it 118-97; a 21-point Milwaukee deficit with 6:41 left to play.

"We want layups. We want to get to the rim, but Milwaukee's one of the best at closing down the paint," Celtics coach Brad Stevens said. "And certainly we saw saw some bad rim reads hurt us in the first half. It got them going in transition, because we tried to shoot it over people and through people instead of kicking it out."

The Celtics, who are now 3-6 since the All-Star break, avenged their 121-119 loss to the Bucks Wednesday night, after coming back from 25-points down in the second half, but Daniel Theis missed a corner 3 to win the game as the final buzzer sounded.
Boston will head to Oklahoma City on a second night of a back-to-back to face the Thunder (19-25) Saturday, tip-off is at 9 PM EST.