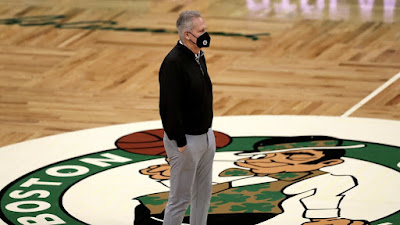 Celtics president of basketball operations Danny Ainge met with the media Friday morning to discuss the moves he made -- first in-season trades since 2015 -- just prior to NBA's deadline.
Boston added Evan Fournier, Moritz Wagner and Luke Kornet on Thursday before 3 PM, sending Javonte Green, Daniel Theis, to the Chicago Bulls and Jeff Teague (along with two second-round picks) to the Orlando Magic. The Celtics, who are 4-6 in their last 10-games and 21-23 overall with the current eighth best record in the Eastern Conference, have had uneven 2020-21 campaign so far.
Despite the team's recent woes, Ainge was clear that he didn't feel pressured to make a move or two to help improve the roster, but rather he sensed some change was needed.

"I didn't feel pressure to do any of these things," said Ainge. "I feel that this is a deal I would've done at any time over the last few years, probably, with this opportunity.

"I guess the greatest pressure is just I want our players to feel hope," said Ainge. "I want our coach to feel hope, and I sensed some discouragement internally with our guys. So that was one reason why I did something now as opposed to waiting somewhere down the road."

"I talk to the players, I’m around the team in the locker room, and I can just sense a feeling of discouragement and frustration like would happen with any team that's playing below what they believe they can play," Ainge explained. "It's not any one incident or any one personality.
"There's a difference when things are going really well and when things aren't," Ainge continued. "I know guys are trying. Our coaching staff works relentlessly and our players are in working everyday, putting in the time. They go through stretches of real optimism and hope. I can see it in their play. But when you're not living up to your expectations, then the opportunity for discouragement and frustration creeps in. I think that happens with every team. It's happened with every team I've been associated with."

When speaking about the acquisition of Fournier, Ainge remains optimistic of not only securing him long-term but also what kind of impact the nine-year wing will have on his new teammates going forward.

"I just hope that by adding another veteran player that's a versatile shooter with size and versatility, that's just going to give us a jolt."

Ainge was asked if he believed the Celtics could compete with the top teams in the East -- like the Philadelphia 76ers, Brooklyn Nets or Milwaukee Bucks -- who they face tonight after losing to them on Wednesday night -- he said he was not certain for sure, but that there were other reasons to make the moves that were made.

"But with Evan in particular, I thought that this opportunity was unique. And to add a player of his caliber, we've talked often about shooting with size, here's a 6-7 kid that is a good shooter, can play-make, can handle the ball. Just another creator for us. And a very consistent player. And we're excited to add him. I think it is a good use of our [trade exception]."

While the second move of trading starting big-man Theis and Green to the Bulls means the Celtics won't pay any luxury tax, Ainge hopes a roster shake-up will have Boston playing up to a level of expectations on both ends of the floor and improve in the standings with the playoffs around the corner.
On the subject of Marcus Smart, who missed 18 games with a calf-injury and hasn't played up to par defensively; after the Celtics were the fourth best team on defense a season ago to now being ranked 24th this year -- Ainge debunked any rumors that Smart was included in any potential deals when he made an appearance on Boston 98.5 The Sports Hub's "Toucher & Rich" program following his media presser.

"Those were all just made up stuff," replied Ainge. "I did read one headline that said something about the Celtics are going to trade a few first-round picks and Marcus Smart for this specific guy. I don't even know where that comes from."
"I'm not sure I've assured anybody that I would never trade them," Ainge added. "But I probably disputed any of the trades that were being talked about. I don't want to trade Marcus."