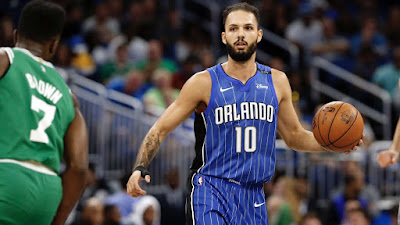 The Celtics debut of new acquisition Evan Fournier will have to wait, as the veteran guard has been placed into the league's health and safety protocol, according to the team's updated injury report.
While Tristan Thompson and Romeo Langford remain in COVID protocol and Kemba Walker is still not playing second nights of back-to-backs after scoring 21 points (31 minutes) in the Celtics' blowout win over the Bucks, Semi Ojeleye is also listed as out tonight against the Oklahoma City Thunder with a left side strain sustained against Milwaukee on Wednesday.


Following being acquired at the trade deadline, Fournier reportedly was in Boston on Friday to take his physical and was expected to join the Celtics on Monday at the latest, but will now have to wait to play with his new teammates. It's unclear if Fournier tested positive for the coronavirus or it's simply contact tracing, but he'll have to quarantine and test negative for at least seven days before making a return.
Fournier, who's averaging 19.7 points on 46.7% shooting this season, won't be able to play until next Sunday when the Celtics host the Charlotte Hornets and old friends Terry Rozier, Brad Wanamaker and Gordon Hayward. Ironically, $17 million of the Hayward (sign and trade) $28.5 million traded player exception was used to acquire Fournier on Thursday.
Joel Pavón
Follow @Joe1_CSP