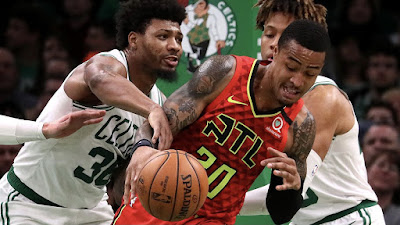 It's no surprise that the Atlanta Hawks' big man John Collins has been linked to Celtics' trade rumors for some time now.
But it would appear that sharp shooter Bogdan Bogdanovic would also be involved in a potential trade between the C's and Hawks, with Atlanta having their eye on veteran guard Marcus Smart.
According to a Monday report from Shams Charania of The Athletic, the Hawks have "expressed interest" in Smart and it's likely that the longest-tenured Celtic would have to at least be discussed and more than likely included in a possible swap.
Smart is averaging 12.6 points on 40% shooting, including 33.3% from 3 this season and is coming back from a calf injury that caused him to miss 18 straight games. Consider by many as the Celtics' emotional leader or unofficial captain, Smart has always been known for his excellent defensive presence (back-to-back All-NBA Defensive first team honors) and strong playmaking.
Despite the Hawks, winners of eight of their last nine; having a better record than the Celtics at 22-21, a great defender and playmaker would be good to pair with an All-Star scorer like Trae Young. But Danny Ainge may not want to part with Smart, as Boston (21-22) looks to crawl out of their recent funk.
Either way, Collins is an athletic big that can spread the floor while averaging 18.2 points and 7.8 rebounds per game at age 23. But he's also expected to command a max contract this offseason after reportedly turning down Atlanta's four-year, $90 million contract extension offer prior to the start of the 2020-21 campaign.
Kevin O'Connor of The Ringer, reported that the Hawks offered Collins to the lonely Minnesota Timberwolves for Malik Beasley and a first-round pick, but the T-Wolves declined.
Another report by The Athletic, suggested that an "initial response" from the Hawks to the Celtics inquiring about Collins was to include Jaylen Brown in a trade believe or not.
It's tough to imagine if Ainge, who's a huge fan of both Smart and Brown be discussed for Collins, even if Bogdanovic (15.1 points and 37.2% on 3's last season with the Kings) is also a part of any possible deal.
The NBA trade deadline, which is on Thursday at 3 PM EST, can't come soon enough.
Joel Pavón
Follow @Joe1_CSP