Why Mason Plumlee, Wayne Ellington trade could be an upgrade for Celtics roster 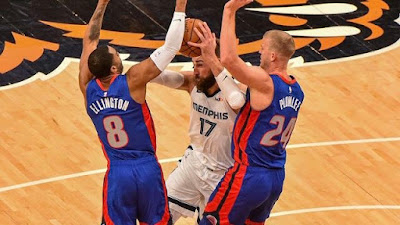 Free agent Blake Griffin has signed with the Brooklyn Nets after the Detroit Pistons bought out the veteran forward's contract last week, as teams prepare for a second half of the season push towards the playoffs.
With the trade deadline on March 25, the Celtics have reportedly targeted frontcourt help like Orlando Magic big man Nikola Vucevic or forwards such as Cleveland Cavaliers forward Larry Nance Jr., and Griffin's now ex-teammate in Jerami Grant to take some pressure off Boston's perimeter trio of Jayson Tatum, Jaylen Brown and Kemba Walker.
While Vucevic and Grant would be great offensively in coach Brad Stevens' system, they are both unrealistic trade targets for the Celtics, despite a report that Danny Ainge has offered some draft picks for the Detriot forward.

"I believe the Celtics have offered multiple first for him (Grant)," said Pistons' insider James Edwards III of The Athletic. "I don't know what multiple means, it could be two it could be three."

Edwards also believes that the Pistons are not looking to move Grant, while at the same time it would take several assets to acquire Magic All-Star Vucevic, who is not actively being shopped around either.
But Edwards and former NBA executive John Hollinger -- also of The Athletic -- write how the Celtics could upgrade their roster without having to mortgage the future and remain in contention this season by trading Tristan Thompson, Javonte Green and next year's first-round pick for Pistons center Mason Plumlee and guard Wayne Ellington.
Despite the two role players not being viewed as attractive names, Plumlee at 10.4 points, 9.1 rebounds per-contest and Ellington averaging 10.8 points per-game are putting up much better numbers than what the Celtics would be giving up, especially in Thompson (7.9 points, 8.3 rebounds), according to Edwards.

"Plumlee, with his frontcourt playmaking and efficiency around the rim, would be an offensive upgrade over Thompson," Edwards writes. "And believe it or not, Plumlee is probably a better rim protector than Thompson. Boston is shooting pretty well from 3 this season, but Ellington adds some depth to a bench that is lacking a scoring punch on the wing."

Hollinger also agrees that such a move would benefit the Celtics by cleaning their hands of Thompson's two-year, $19 million contract and while he "didn't love Plumlee's (three-year, $25 million) deal either but compared to Thompson, the Plumdog Millionaire was a steal." The former NBA executive also suggested Ainge could toss in a couple of guards as part of the deal.

"I'd also expect Boston," Hollinger writes, "to enjoin in some extended 'Are you sure we can't interest you in a lightly used Romeo Langford?' and 'What it would take for you to drive off this lot with Jeff Teague?' discussions before eventually coughing up a protected first, one that would be top-14 protected for three seasons before turning into two seconds."

Langford, the Celtics No. 14th overall pick in the 2019 NBA Draft, has not played at all this season after undergoing wrist surgery last September. Teague has had an inconsistent 2020-21 campaign so far, struggling to score off the bench at times and has been in and out of Stevens' rotation. However, the veteran guard has upped his production as of the last several games.
While such a trade would likely be more of last effort to upgrade a roster without the shine of sexier names, Plumlee and Ellington could solve the Celtics' need without breaking the bank. Plus, Edwards says the Pistons would be "saving Danny Ainge from drafting another fringe NBA player late in the first round" by taking on their first-round pick.
The Celtics also have their famous $28.5 million trade exception to play with, using some of it to absorb salary and not having to send money back to the Pistons in a potential trade. Though Ainge and Wyc Grousbeck have also said that they could save the team's TPE for the offseason, using a portion of the exception prior to the deadline is definitely not off the table.
Joel Pavón
Follow @Joe1_CSP