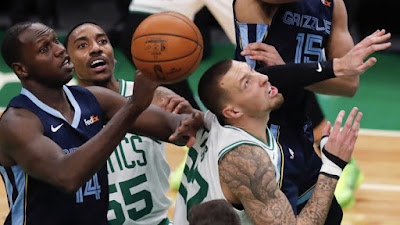 The Celtics made a second move of the day just prior to the 3 PM NBA trade deadline, by sending Daniel Theis to the Chicago Bulls for Mo Wagner and a draft pick, per Adrian Wojnarowski of ESPN.
Javonte Green was also involved in the deal, which became a three-team swap with the Washington Wizards, according to Yahoo Sports! insider Keith Smith.
Ryan McDonough of Radio.com had a full breakdown of the the trade; that also includes young big man Luke Kornet coming to the Celtics via the Bulls and is on an expiring contract at $2.2 million. Other than Theis ($5 million) and Green ($1.5 million), Chicago receives $1.3 million from the C's, along with guard Troy Brown and $250,000 from Washington.
The Wizards, who traded Wagner to the Bulls Thursday morning, will get Daniel Grafford and Chandler Hutchinson in return.

Details of the Celtics/Wizards/Bulls deal, per league sources:

This move for Wagner brings the Celtics back below the luxury tax threshold since he's in the final year of a $2.1 million contract.
Danny Ainge, who made his first in-season trade in over six years, also sent veteran point guard Jeff Teague to the Orlando Magic as part of the trade for Evan Fournier from earlier in the day, per Joshua Robbins of The Athletic.

The Magic will receive Jeff Teague and two second-round picks from the Celtics to complete the Evan Fournier trade, league sources tell @JaredWeissNBA and me. Teague has been told he doesn’t have to report to the Magic and will be waived by the Magic, per a league source.

Today's trades give the Celtics an open roster spot for potential buyout candidates such as LaMarcus Aldridge, Andre Drummond or others.
Theis after three plus years in Boston, heads to the Bulls with averages of 7.2 points on 55.2% shooting and 5.2 rebounds. He started 106 of 236 regular seasons games and will become an unrestricted free agent this summer, where he'll command more than what the Celtics were likely to pay.
Wagner is averaging 7.1 points, 2.9 rebounds and 1.3 assists per game this season, he'll also become an unrestricted free agent come July.
Joel Pavón
Follow @Joe1_CSP