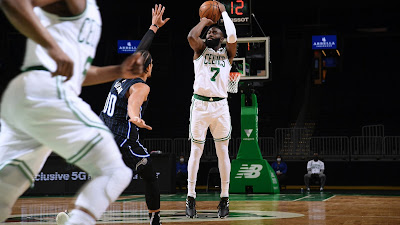 The Celtics snapped a three-game losing streak after cruising past the Orlando Magic to a 112-96 win Sunday afternoon at TD Garden.
Jaylen Brown hit a career-high 10 3-pointers, while finishing with 34 points on 12-of-24 from the field. Jayson Tatum scored 23 points (7-of-13) and Kemba Walker added 14 points to lead the Celtics back to a .500 record at 21-21.
Boston overall netted 23 3-pointers (23-of-54), one shy of the franchise record for the most 3's made and Brown (10-of-18) was one short of Marcus Smart's team record of 11 for a single player.

"I lost count at some point," Brown said in his postgame presser. "I wish somebody would have told me that. I would have fired up five, six more to make sure I beat Marcus."

Nikola Vucevic had 22 points and 13 rebounds for the Magic, who beat the Brooklyn Nets on Friday to snap a nine-game losing streak. James Ennis scored 18 points off the bench and Evan Fournier chipped in 16 points for Orlando (14-28)
The Celtics lead by as many as 23-points, before the Magic cut the deficit to 91-83 early in the fourth quarter. Boston scored 12 of the next 16 points — including a pair of 3-pointers by Brown and one by Walker to keep a double-digit advantage.

"This team has been in a funk in some ways with that stuff, but that's not who they are," Celtics coach Brad Stevens said. "We've seen what they do when their backs are against the wall. We know that they compete. There's never been a question of that."

The Magic were up by five points early the first quarter and had a 40-37 lead with seven minutes remaining in the half before Brown made a pair of 3-pointers that led to an 11-2 Celtics' run. Orlando was held to 17 points in the second period.
With Boston ahead 50-46 under a minute left before intermission, Tatum, who finished the half with 19 points, nailed back-to-back 3's to give the Celtics their first double-digit lead. They would open up the third quarter scoring 10 unanswered points and that sparked a 19-5 run to take a 21-point lead.
While the Celtics hit 20 of their first 40 3-point attempts, they held the Magic to 32.4% from deep and 38.1% overall from the floor.

"It takes teams time. Sometimes it comes quick. Sometimes it comes at different stages in the season, and some teams never get it," Stevens said. "The goal is to find your best version. We have to do it with all five on every possession at both ends of the floor."

The Celtics are now 2-4 since the All-Star break and are heading out on the road this week for a four-game trip that begins Monday night against the Memphis Grizzlies, with a 9 PM EST tip-off.


Game Notes:
Boston shot 45.5% percent from the field and 42.6% from 3, while putting up 27 assists on 40 made baskets. Marcus Smart, who led the Celtics with eight dimes, played 33 minutes for a second straight game and scored 11 points. The C's were also a perfect 9-of-9 at the free-throw line.
Joel Pavón
Follow @Joe1_CSP