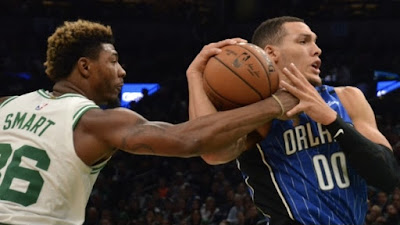 Just when you thought Danny Ainge would sit tight at the trade deadline, the newest trade rumor seems to have squashed that narrative.
In hopes of retooling their depleted roster, the Celtics reportedly have their eyes set on Orlando big man Aaron Gordon — a player that the team has been targeting over the past two trade deadlines, according to Yahoo! Sports' Keith Smith.

Sources: Aaron Gordon has put the Boston Celtics near the top of the list of teams he would like be traded to. Celtics and Magic remain engaged in trade talks. Boston has moved to Gordon as their primary target three days from the trade deadline.


This comes after reports surfaced that the 25- year old has requested a trade. Boston reportedly has jumped to the "top of the list" of teams he wants to be traded to.
In light of the Celtics' interest, Matt Moore of the Action Network has heard rumblings of Boston being the most likely destination for Gordon's services.

"The Boston Celtics are considered the front-runners to add Orlando Magic forward Aaron Gordon via trade, multiple sources confirmed to The Action Network Monday night. While the framework of a deal is in active discussion and considered the lead offer, sources say no deal has been agreed upon and the Magic are expected to continue taking offers up until Thursday's deadline."

Moore also added they've offered two first-round picks, with the Magic asking for Marcus Smart in a potential trade. Gordon is in third season of a four-year deal worth $80 million and other teams that have shown interest in him have reportedly been reluctant to match Orlando's asking price, but the Celtics — with a 21-22 record and a $28.5 million traded player exception make themselves buyers at the deadline — are willing to offer up the necessary draft compensation, despite potential protections still being unclear at this point.
According to Sam Amick of The Athletic, the Celtics are also rumored to be interested in adding Magic wing Evan Fournier as part of a trade package for Gordon.

"The Celtics are now considered the front-runners in the Gordon sweepstakes. A source with knowledge of the Gordon talks said the Celtics have indeed put two first-round picks on the table, and that the framework of the deal would also include Magic guard (and free-agent-to-be) Evan Fournier heading to the Celtics."

Amick also reported Smart would likely be included in that potential deal with his $13.4 million cap hit. The Celtics' trade exception can only be used on one player, so the Celtics would need to work on a three-team trade to make it work. Gordon making $18.1 million this season and $16.4 million next year, paired with Fournier's $17.1 million expiring contract, as Ainge will need to get creative to match salaries.
That could certainly include Boston parting ways with Tristian Thompson's two-year, $19 million contract. Thompson, who is currently on the COVID health and safety protocol list, is rumored to be "resented" by his teammates, which was revealed by Kevin O'Connor and Chris Vernon on The Mismatch Podcast. However, Jaylen Brown debunked that rumor on Twitter, replying with a "cap" emoji along with Kemba Walker also replying with "We love TT."


Regardless, considering his inconsistency and cap number, don't be shocked to see Thompson on the move again if the Celtics need to clear some cap room to complete a deal.
Gordon is having another productive year in Orlando and would be a nice fit for the Celtics roster. In 29 minutes per game, Gordon has splits of 14.7 points, 6.8 rebounds, 4.2 assists, and is shooting 44.2% from the field. He's also a reliable threat from deep this season, shooting at a career-high clip of 40%.
While he isn't the traditional big man that could anchor the defense, Gordon would bring athleticism, scoring, defensive versatility, and shooting to a team that has struggled to get consistent production in their front-court.
Quietly having one of the best seasons of his career, Fournier is averaging over 19 points per game on 45% shooting, including 38% from beyond the arc. Although he's having a solid year offensively, he is on the last year of his contract, and could be looking for a sizable deal in the offseason.
It remans to be seen just how real these rumors are considering the Celtics' history, but in the middle of their lackluster season, it won't be surprising to see Gordon to be in a Celtics uniform by Thursday's deadline.
They still have a big decision to make if they decide to wait until the offseason to use the exception before it expires or part ways with some of their key players for more depth. Now could be the perfect time for the Celtics to finally add some excitement to their roster -- unless this was just trade buzz and Boston remains a part of just another reported trade rumor.
Ian Carrano
Follow @IC_Sports1