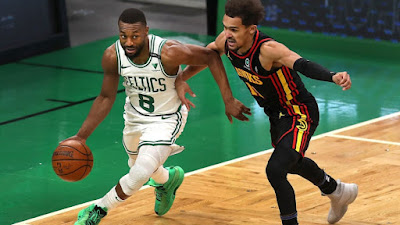 It was Trae Young who put on a shooting clinic at TD Garden two nights ago, on Friday Kemba Walker led the Celtics to a 121-109 win over the Atlanta Hawks at home.
Walker returned from load management to score a season-high 28 points on 10-of-16 shooting, including hitting 5-of-8 from deep to go along with six assists to help Boston split their two-game mini series and avenging a loss to the Hawks.

"It was a great win for us. I thought we played well," Walker said postgame. "We moved the basketball. Defensively we were in the right spots. Hopefully we can really just build off this."

Jayson Tatum finished with 25 points, eight rebounds and six assists. Jaylen Brown and Tristan Thompson each netted 17 points. Daniel Theis chipped in 14 points and eight rebounds after a two-game absence with a right index finger sprain.
Trae Young recorded a double-double of 31 points (10-of-16 shooting), 11 assists for Atlanta, who have lost five of their last six.
Clint Capela also notched another double-double of his own on with 24 points, 15 rebounds, while Sam Hill added 12 points off the bench to lead the Hawks who are now 12-17.
Boston led by 27 in the third quarter before the Hawks cut the deficit down to single-digits, 108-99 with 4:50 left in the game. Theis scored 10 of his 14 points in the final minutes to help the Celtics close it out.
Walker made his presence felt early after scoring eight points in the first quarter, on his way to 20 in the half, including reeling off nine straight during a 20-5 run in the second period that gave the Celtics a 62-37 advantage at the break.

"We struggled through this stretch, and there's been a lot of angst and a lot of talk, but in three of the last four games Kemba's played, we've won, and in all four games, he's played pretty darn well," Brad Stevens said. "You can tell he's really coming. So that's a real positive for our team. He was by far our best player in Washington and then he was good against Denver, and then I thought he was terrific tonight."

The Hawks were held to 42.2-percent shooting after hitting over 57-percent on Wednesday, while Boston shot 55.6-percent from the field (40-percent from 3) Friday, which was a vast improvement from their 46.5 percent of made shots (32.3 percent from behind the arc) two nights prior.
The Celtics at 15-14 will head out on a three-game road trip beginning on Sunday in New Orleans. Tip-off against the Pelicans is scheduled for a 3:30 pm EST start and will be nationally televised on ABC.


Game Notes:
Boston assisted 26 times on 50 made baskets and outscored the Hawks in the paint 66-52. The Celtics also out-rebounded Atlanta 51-46 and made it to the free throw line on 10 trips and hit seven, while knocking down 14-of-35 from 3-point territory.