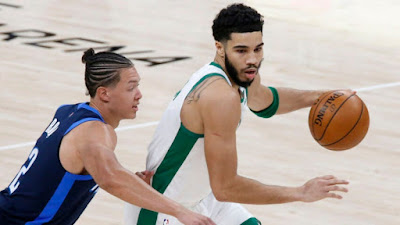 The shorthanded Celtics used a fourth quarter rally to beat the Oklahoma City Thunder 111-94 Saturday night at Chesapeake Energy Arena.
Jayson Tatum scored 20 of his 27 points in the second half and Jaylen Brown netted 25 points to lead the Celtics back to a .500 record at 23-23 and a 2-2 road trip.
Rookie Payton Pritchard (12 points, seven rebounds) and Carsen Edwards (12 points) gave Boston a much needed boost for their second straight win.

"We feel good," Marcus Smart said at is postgame presser. "We don't feel great. We don't feel like -- we're not complacent. We're not done. We're not satisfied. This is just a start for us."

Moses Brown, who was inserted into the starting lineup after the team announced that veteran big Al Horford would be inactive for the rest of the season, finished with a career-high 21 points and set a franchise record with 19 of his 23 rebounds in the first half. Theo Maledon finished with 22 points for the 19-26 Thunder.
The Celtics without Kemba Walker, Evan Fournier and Tristan Thompson trailed 14-2 to start the game and were down 47-52 by halftime. Jaylen Brown's 13 third quarter points kept Boston hanging around, as Oklahoma City had a 80-76 advantage heading into the final frame.
With 10:35 left to play, Celtics newcomer Luke Kornet (eight points, five rebounds) hit back-to-back 3's to break an 82-82 tie and give Boston their first lead of the night and never look back.
A fast-break dunk by Tatum put the Celtics up 95-82 and capped a 13-0 run, as Boston shot 56% in the quarter and outscored the Thunder 35-14. Oklahoma City only made 5-of-17 shots in the final period to lose their second straight.

"This was one where we had to find a way because we can't keep going back and forth," Celtics coach Brad Stevens said. 'We've got to establish some momentum here."

Boston is now 4-6 since the All-Star break and are looking to keep rolling, especially with a seven-game homestand scheduled to begin on Monday night. Celtics' fans will return to the TD Garden for the first time in over a year when the New Orleans Pelicans come to town. NBATV has the tip-off at 7:30 PM EST.