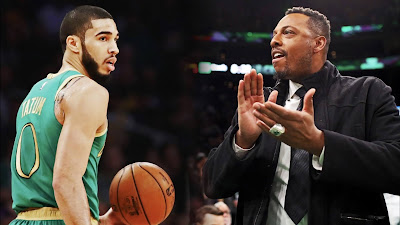 Celtics legend and future Hall-of-Famer Paul Pierce knows a thing or two about handling pressure in a city like Boston.
"The Truth" also knows how much rests on the shoulders of current All-Stars Jayson Tatum and Jaylen Brown, who have had to deal with a lot more expectations following a trip to the Eastern Conference Finals in the bubble a season ago.
With Gordon Hayward signing with the Charlotte Hornets, Kemba Walker returning from a knee injury and Marcus Smart missing 18 straight games with a calf strain, the pressure; fair or not keeps mounting on the young Celtics' duo of Tatum and Brown.

"I just feel like there's so much pressure on Tatum and Brown to perform each and every night for them to even have a chance," Pierce said in an interview with Tom Westerholm of Boston.com on Wednesday. "[There's] not much depth off the bench. Smart, him coming back, but it's not many guys you can rely on outside of those two or three guys."

Pierce admits he still watches his old team quite often, saying "Me and old KG, we like to sit back and watch the games and stuff," but following a 117-110 loss to the Cleveland Cavaliers, the former superstar believes the Celtics -- now at 20-20 on the season -- need more consistency from their second unit.

"Right now, they're a team that is just missing something," Pierce said. "Yeah, they have two All-Stars, I think they have great coaching, I think they have good leadership, they just don't have the depth, I believe. I think they need another player that's consistent, one you can count on each and every night that's going to bring you something to the table."

While the NBA trade deadline is less than a week away, there continues to be reports swirling around Harrison Barnes and several others as possible targets to upgrade the Celtics roster.
Even Danny Ainge has called the 2020-21 campaign a "challenging" one and was pretty straight forward this week on how the team has performed overall.

"It just seems like we don't have a lot of characteristics of a really good team, for sure," Ainge on Thursday during his weekly radio appearance. "We have some talented guys but our team right now is not playing as well as we had hoped."

Despite Pierce understanding what goes into to being the face of a storied franchise like the Celtics and can offer all the knowledge in the world to Tatum and Brown, the 10-time All-Star also doesn't want to step beyond his boundaries with the two rising stars if they haven't asked for his help.

"I never want to put pressure on these guys to live up to what past Celtics have done," Pierce said. "Most of the time, when I see these guys is when I come in town, and it was like that with me and former players. I talked to Bill Russell from time to time but most of the time, when we had our conversations and we linked up and had dinners when he was in town and we could just kind of share a moment together. But they know that I'm watching from afar. I'm constantly commenting on them, and they all have my phone numbers too, so if they ever want to reach out and talk about anything, I'm always open lines.

"But you don't want to be up on that player giving your opinion, because I'll have an opinion every night. I would never want to put that pressure — and I couldn't even imagine how I would feel if Bill Russell called me after every game, I’d probably feel an immense amount of pressure. Like, 'Man, I’m trying to live up to the Celtics greats of the past.' And that's why I like to have a casual relationship with these guys so they don't feel that pressure, because a lot comes with being a Boston Celtic."

Though Pierce experienced the same pressure and then some, he also embraced it while becoming one of this generation's best to put on a uniform with Boston across his chest. Still, even as time passes and a new crop of players come through the Celtics' organization, Pierce doesn't forget the legacy he left behind and what it means.

"I'll always bleed green and I'll always be a Celtic," he said. "I get excited for this new generation of players."