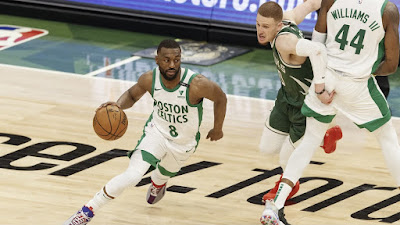 It would have a been the biggest comeback win of the season for the Celtics as Daniel Theis' corner 3-point attempt rimmed out and the final buzzer sounded. The Milwaukee Bucks barely held on to a 121-119 victory at Fiserv Forum Wednesday night.
Jaylen Brown led the Celtics -- now 21-23 on the season and have lost five of their last six -- with 24 points on 10-of-16 shooting and 10 rebounds. Kemba Walker finished with 23 points, six assists, while Jeff Teague added 15 points.
Jayson Tatum; who returned from an illness that sidelined him against the Memphis Grizzlies on Monday, added 18 points (7-of-19 from the field) and eight rebounds.
Khris Middleton led the Bucks (29-14) with 27 points, 13 rebounds and Bobby Portis had 21 points off the bench. Donte DiVincenzo and Brook Lopez each contributed 17 apiece for Milwaukee, now winners of eight in a row since the All-Star break.
The Celtics trailed 90-65 midway through the third quarter, their largest deficit of the night before they chipped away throughout the final frame. Brown's 3-pointer with 1:32 left to play cut the Bucks' 25-point lead to two, but Boston missed a few opportunities to tie the game or go ahead the rest of the way.
Marcus Smart (12 points, six assists) missed a 3 with 1:06 remaining, Walker had a layup blocked 30 seconds later by DiVencenzo and Smart also got a layup attempt blocked by Lopez with 2 seconds left.
Middleton knocked out of bounds a Smart inbound pass, giving the Celtics one last chance with 1 second on the clock.
Smart found a wide open Theis in front of the Celtics' bench as Lopez closed in on the 3-point shot that hit the rim and the buzzer sounded.

"Lopez is playing off Theis and just protecting any cut to the rim, so Theis was the best option there," Celtics coach Brad Stevens said. "He got a great look. He stepped in and shot it with authority, back-rimmed it, looked good."

It was the second time this season that a game was decided in the final seconds between these two teams, with the Celtics winning the first meeting 122-121 on a banked 3-pointer by Tatum.
Despite Boston holding the reigning league MVP Giannis Antetokounmpo to 13 points (second lowest scoring output this year) on 4-of-11 from the floor, he did grab eight rebounds and handed out seven assists.
The Celtics will remain in Milwaukee and face the Bucks one more time on Friday night. ESPN will have the tip-off at 7:30 PM EST.

Boston shot 47.9% from the field and 40.4% from behind the arc, while the Bucks shot 50% from the floor and 45.9% from deep. The Celtics outscored Milwaukee 48-40 in the paint, but were out-rebounded 56-44.
Semi Ojeleye left the game in the second quarter after being helped to the locker room for a right hip contusion.
Joel Pavón
Follow @Joe1_CSP