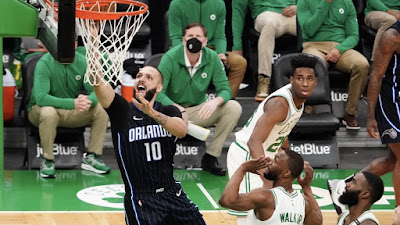 The Celtics have reportedly finalized a deal to acquire Orlando Magic guard Evan Fournier for two-second round picks with hours left before Thursday's trade deadline, according to Adrian Wojnarowski of ESPN.
The Magic already have moved Nikola Vucevic to the Chicago Bulls and Aaron Gordon, who was very much linked to the Celtics this week, is heading to the Denver Nuggets; per reports.
Fournier, 28, is averaging a career-high 19.7 points, 3.7 assists while shooting 47.1% from the field and 38.8% from deep this season. He gives Boston some solid scoring off the bench, as he has a 14.4 points per game average for his nine years in the league.
It appears for the time being that Danny Ainge will use part of the team's $28.5 million traded player (Gordon Hayward sign and trade) exception to absorbs $17.1 million of Fournier's expiring contract, leaving about $11 million of the TPE left. The Celtics will also have to make room for their new acquisition, as they're currently at the 17-player roster max limit.
Boston began the day as the eighth seed in the Eastern Conference at 21-23 record, following their disappointing loss to the Milwaukee Bucks Wednesday night.
Joel Pavón
Follow @Joe1_CSP