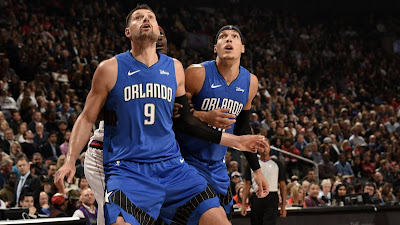 Danny Ainge and the Celtics were pretty busy on Thursday before the 3 PM NBA trading deadline.
Apparently it was even busier than most realized since according to a report by Adam Himmelsbach of the Boston Globe, the Celtics were finalist in the pursuit of Orlando Magic All-Star Nikola Vucevic. A league source told Himmelsbach that the offer for the now Bulls new center, included multiple first-round picks.
The Magic ended up sending Vucevic and forward Al-Farouq Aminu to Chicago for young big man Wendell Carter Jr., Otto Porter Jr., and two first-round picks.
The Celtics were also a finalist for Magic forward Aaron Gordon, per Himmelsbach. Boston was rumored to be "frontrunners" to acquire Gordon in the days leading up to the league deadline, with reports suggesting that guard Marcus Smart was involved in those potential trade talks. However, the Celtics didn't offer Smart but instead an unspecified young player plus a first-round pick.
Orlando ultimately decided to send Gordon to Denver for young guards Gary Harris Jr. and R.J. Hampton plus a first-round pick.
Ainge did end up pulling the trigger on a move with the Magic, acquiring guard Evan Fournier for two second-round picks and using roughly $17 million of their $28.5 million trade exception. Veteran point guard Jeff Teague was sent to Orlando as part of the deal; he's since been waived.
Center Daniel Theis and guard Javonte Green were also shipped from the Celtics to the Bulls for expiring contracts of big men Moritz Wagner and Luke Kornet.
Despite the trade deadline coming and going, it appears that Ainge and the Celtics are still looking to add another new face to the roster. They're reportedly have a "real shot" to sign veteran center Andre Drummond, who was bought out by the Cavaliers on Friday and could make a decision as soon as today on who he'll play for.
Joel Pavón
Follow @Joe1_CSP