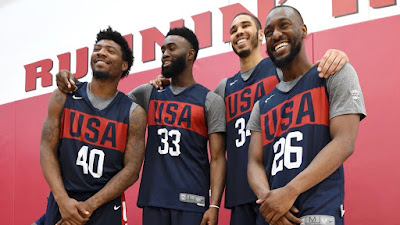 The Celtics core four of Jaylen Brown, Jayson Tatum, Kemba Walker and Marcus Smart have reportedly made the cut as finalists for the 2021 U.S. Olympic team.
According to The Athletic's Shams Charania, Smart, who just returned from a torn left calf, has opted out, citing injury concerns along with deep playoff runs in back-to-back campaigns with an abbreviated summer offseason as the reasons to rest instead of participate.

One name missing from Team USA’s 57-player pool for Olympics: Boston’s Marcus Smart, who sources say was invited but opted out due to injury concerns from playing late into consecutive seasons and a shortened offseason this summer.


USA Basketball announced who were the 57 finalists for the men's U.S. Olympic team on Thursday.


While there is no word on which Celtic will make the final roster, the Olympics are scheduled to begin on July 23 in Tokyo, Japan and going through August 8 of this year. It wouldn't be shocking if Walker, or Brown, who have dealt with knee issues this season and Tatum, who's still recovering from COVID-19; were to decline an invite this summer.
The current NBA campaign is scheduled to end no later than July 22 (Game 7 of the Finals if necessary), leaving barely any time off for players playing into the Finals, with not much more than a couple of weeks off for those that have an early playoff exit and a few more weeks for players that miss the postseason entirely.
League Commissioner Adam Silver address some concerns regarding the U.S. team and assured during All-Star Weekend that the 2021-22 season would start on time, giving invitees that accept nearly three months to rest following the Olympics.
Joel Pavón
Follow @Joe1_CSP