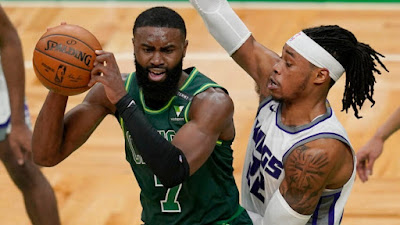 It was another poorly executed fourth quarter for the Celtics who were swept in a season series by the Sacramento Kings for the first time since 2007, following a 107-96 loss Friday night at TD Garden.
De'Aaron Fox led all scorers with 29 points on 11-of-20 shooting, while Richaun Holmes recorded a double-double of 25 points (season-high) and 13 rebounds to help defeat Boston, who have dropped their third straight and are below .500 for a third time this season at 20-21.
Buddy Hield finished with 22 points and rumored Celtics' trade target Harrison Barnes added 15 points, 13 rebounds for the 17-24 Kings.

"You have to be so engaged to win an NBA game. When you're not, you don't. We're not," Celtics coach Brad Stevens said. "It's got to be 17 guys dying to play well together, and I think the fun follows that."

Jaylen Brown shot 8-of-20 for 19 points and grabbed 11 rebounds, while Kemba Walker netted 16 points on 6-of-18 from the field. Jayson Tatum also struggled on 6-of-16 made attempts to score 15 points and Daniel Theis chipped in 14 points, eight rebounds for the Celtics that are now 1-4 since the All-Star break.
Boston played from behind for the third straight game, but came back from their deficit to take a very brief three-point lead in the fourth quarter. Fox hit a go-ahead 3 with 5:47 left to break a 87-87 tie and Sacramento outscored the Celtics 20-9 the rest of the way to pick up their second straight victory.
The Kings lead by as many as 10 in the first quarter and pushed it to 15 in the second, and held a 67-54 advantage with eight minutes left in the third before Boston scored nine straight unanswered points. Payton Pritchard's 3-pointer knotted it up at 76-76 with two minutes left in the quarter.
The Celtics regained a 91-90 lead with 4:30 remaining, but gave up 10 of the next 12 points, which including a banked 3-point shot at the buzzer by Holmes -- only his second made 3 this season.
Boston shot 6-of-21 from the floor in the final frame and were outscored 25-15. Tatum and Brown combined for two points on 1-of-4 shot attempts.
The Celtics host the Orlando Magic (14-27) Sunday afternoon, as tip-off is at 3:30 PM EST.
Game Notes:
Celtics shot 42.9% from the field and 38.7% (12-of-31), while the Kings hit 45.7% from the floor and 40% on 3's. Boston only attempted seven free throws and made six of them. Sacramento went 21-26 from the charity stripe. The C's also outscored the Kings in the paint 50-38.
Joel Pavón
Follow @Joe1_CSP