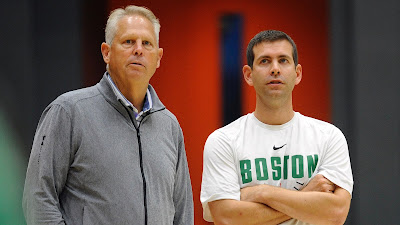 Danny Ainge has been pretty clear that he'll accept any and all blame for the Celtics' 18-17 disappointing record so far.
But what the team's president of basketball operations won't stand for apparently, is any criticism from his peers around the league when it comes to trading practices to improve his roster.
In his weekly radio appearance on Boston's 98.5 The Sports Hub, Ainge fired back at an ESPN report regarding his rumored trade tactics, that an anonymous Western Conference GM said the Celtics "only do something if they think they're going to bury you."

"I think that's ridiculous," Ainge said Thursday morning on the "Toucher and Rich" Show. "I have conversations regularly, daily, with [opposing GMs]. It's not about winning a deal, it's about finding a partner that needs and wants what we have, and us finding and wanting what [they] have. I'm not trying to bury anybody in a deal. I'm trying to make our team better."

While Ainge has recently admitted to being frustrated with the 2020-21 Celtics season, going as far as stating that the roster is not good enough to compete for a championship, this would mean he would have make a move or two before the March 25 deadline -- something Ainge hasn't done in over six years -- since trading for fan favorite Isaiah Thomas.
Ainge has been criticized in the past for not being able to attract big name free agents or swing trades for superstars. Despite proven naysayers wrong over the last few years with bringing in some quality All-Stars, Ainge couldn't keep them for very long like Gordon Hayward, Al Horford or Kyrie Irving, who all walked in free agency for virtually nothing in return.
However, Ainge is also very much aware that his reputation around the NBA that he may overvalue his players in trade talks, something he believes rings true with every other team in potential player swap discussions.

"Listen, I've heard people say that I overvalue my players. I think that's the case with everybody," said Ainge. "I really like my guys. Even when they're not playing well, I like the players. I'm around them every day. I enjoy them. I enjoy them as people. I want to see them succeed. I'm trying to help them and surround them with people that can help them succeed. So I don't know if I overvalue them, but I do like them. If anything, maybe I'm guilty of liking my people too much as people and knowing the fit and the culture that is created in the organization. But I don't think that I'm trying to pull a fast one on other organizations or other people that I'm dealing with. They know what we have and they like them or they don't."

With the trade deadline looming and the Celtics hovering around .500, Ainge could be up to something if you put any stock into a report released on Thursday about the team's top trade targets, by Shams Charania of The Athletic.
According to Charania, the Celtics have their eye on Detroit Pistons forward Jerami Grant, Orlando Magic All-Star Nikola Vucevic and Sacramento Kings big man Nemanja Bjelica.
Ainge has long confessed a need for "shooting with size" and all three players fit that mold. The 6-foot-8 Grant is averaging 23.8 points per game and shooting 36.3-percent from 3-point range, while Vucevic (6-foot-10, 24.6 points per game) and Bjelica (6-foot-10, 8.3 points per game) both have career 3-point percentages of over 35.
Though the Celtics don't posses the wealth of assets they once had, Vucevic may have a steep price tag and the Pistons haven't really made Grant available, so look for "Trader Danny" to get somewhat creative on improving his roster to boost their chances to compete in an NBA Final.
Joel Pavón
Follow @Joe1_CSP