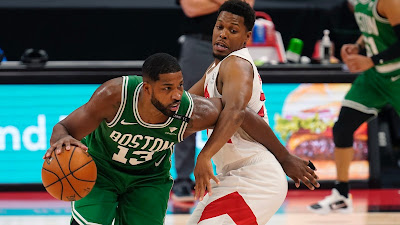 Tristan Thompson played nine seasons for the Cleveland Cavaliers before signing a two-year, $19 million deal with the Celtics this past offseason and the big man reportedly could be on the move again.
According to Chris Haynes of Yahoo! Sports, the Celtics could trade Thompson before the March 25 deadline, "with the Toronto Raptors being a possible destination."
Thompson, who is a Toronto native, is averaging 7.9 points and 8.3 rebounds this season and has a player option for next season. Despite Thompson's recent solid play, the emergence of Robert Williams III and Philadelphia 76ers' superstar Joel Embiid putting up MVP numbers may have made the Celtics' starting big man expendable.
While it remains to be seen what the Raptors may want in return, but at 17-22 -- they're looking more like sellers come the trade deadline after losing seven of their last 10 games. Old friend Aron Baynes, who's always matched up well against Embiid in the past, could intrigue Danny Ainge in a possible swap. The former Celtic signed a two-year, $14 million deal with a team option for the 2021-22 season with Toronto this past fall.
Kyle Lowry is on the last year of his current contract with the Raptors and at $30 million he has been the subject of trade rumors. Wings Patrick McCaw ($4 million) and Stanley Johnson ($3.8 million) are also on expiring deals.
Thompson's status is worth keeping an eye on, especially since the Celtics' center is currently out due to being placed into health and safety protocol, per Adrian Wojnarowski.
Joel Pavón
Follow @Joe1_CSP