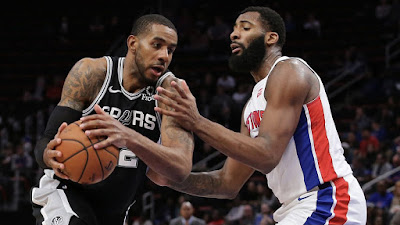 The Celtics rumor-mill continues to spin with less than 24 hours before the NBA trade deadline, Danny Ainge is reportedly interested in bigs LaMarcus Aldridge and Andre Drummond.
According to Jake Fisher of Bleacher Report, Boston only wants to acquire the two centers only of they're bought out by the San Antonio Spurs and Cleveland respectively.
Since Aldridge and Drummond have been asked to stay away from their teams in recent weeks, both have been linked to trade rumors since they are still very good offense players that would give the Celtics' bench -- 26th in the league in points at 32.3 -- a much needed boost.
In his 14th year in the league, Aldridge has career averages of 19.4 points and 8.3 rebounds per game. This season for the Spurs, those numbers dropped to 13.7 points and 4.5 rebounds in about 26 minutes per contest. He's still has a reliable mid-range game and could be a great pick-up for Boston, especially if all else fails with a possible Aaron Gordon, or John Collins deal.
Fischer reports that a team scout said, "that sounds like their No. 1 priority," Aldridge has also been linked to the Miami Heat over the last few days leading up to Thursday's trade deadline.
While Drummond's skills are very different, the veteran lives in the paint and this season in Cleveland, he's averaging 18 points and 14 rebounds a night. Most GM's believe he will bolt for the Lakers if he gets bought out, but the Celtics could have a spot for him in the rotation as the 27-year-old can help make a playoff push -- something he has not done in quite some time now.
Joel Pavón
Follow @Joe1_CSP