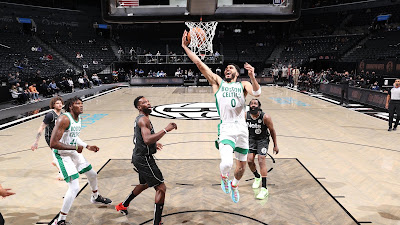 After missing 18 straight games due to a left calf-strain, the Celtics welcomed back Marcus Smart off the bench on Thursday night, beginning the second-half of their schedule.
Despite one of their top defenders returning, the Celtics simply couldn't keep up with Kyrie Irving's season-high 40- point offensive outburst and James Harden's all-around performance. The Nets, without Kevin Durant and recently-signed Blake Griffin, defeated the Celtics 121-109 at Barclays Center.
When addressing the team's performance, Smart kept it simple. Pointing out that it wasn't a lack of effort that contributed to his team's loss, Smart believed it was more of a lack of execution.

Smart made his usual impact on the defensive end, but had a surprisingly efficient performance offensively, adding 19 points (4-of-6 shooting), while making three of his five three-point attempts. Tatum finished with a team-high 31 points (13-of-22 shooting), with Brown added only 13 points on a disastrous 5-of-23 from the field. Robert Williams showcased his effort on the defensive end, blocking five shots on the night.
While the Celtics had plenty of opportunities to take down the Nets, Smart praised the Nets' ability to carry out their game plan-- something the Celtics struggled to do, especially down the stretch.

"They executed better, they did what they were supposed to do and came out with the win," said Smart. "We got chances after chances, we just got to execute them better."

Irving had another efficient night scoring, making 15-of-23 shots and knocking down five out of his eight three-point attempts. Landry Shamat added 18 points off the bench, while Harden scored 22 points and dished out eight assists. Even though Brooklyn was missing one of the members of their "Big-3," the Celtics were well aware of the challenges the Nets' offense presents on a nightly basis.

"That's a big reason why I think they're so unique. They're one of the better shooting teams that's ever been assembled around those special one-on-one players, and those guys are special shooters that you're rotating to, as well," said Brad Stevens postgame.

Hoping to put their six-straight road losses behind them, the Celtics came out strong, keeping the Nets' superstars in check. With a 13-2 scoring run early in the first quarter, Boston looked primed to keep the game competitive. Leading by as much as 11 in the first half, Kemba Walker's hot start (9 points, 4-of- 5 shooting) kept the Celtics' offense afloat with Brown and Tatum both struggling from the field in the opening frame. Although Walker's early scoring was encouraging, he made only one field goal the rest of the game, finishing with 11 points.
Smart, coming back from injury, showed little rust in his first game back knocking down his first shot of the game from deep-- the first of his three made 3-point field goals. With his defensive leader returning to the lineup, Stevens was happy Smart was back healthy and producing at a high level.

"Great to have him back out on the floor. I thought he did a lot of good things, and he’ll only get better as he gets used to game action," said Stevens,

The Nets flipped the switch in the second quarter with Kyrie Irving's dominance offensively. Beating the Celtics defenders off the dribble, Irving found easy lanes to the rim and knocked down jumpers efficiently, scoring 12 points alone in the second to go into the break with a team-high 18 points.
Hoping to put away his difficult first quarter, Brown still couldn't find his rhythm in the second, as he made only one of his nine attempts from the field at the half. Luckily for Boston, Tatum picked it up offensively, scoring nine points in the quarter to lead the Celtics in scoring.
Knowing they needed to pick up their effort on both ends, the Celtics responded early in the third quarter led by some early offense from Tatum. On their opening possession, Tatum's mid-range jumper sparked a 9-0 run, which paired with the Celtics' defensive intensity, powered Boston to a six-point lead after trailing by three at the half. Only scoring two points in the first-half, Brown had a better start to the second-half knocking down two 3-pointers early in the quarter.
Despite the Celtics' hot start defensively, Boston's defense proved to be no match for Irving, who continued his offensive brilliance, adding another 14 points to his already impressive scoring total.
With back-to-back scores to end the third quarter, Tatum entered the final frame with a team-high 24 points, but the Nets' 8-0 run at the end of the third gave Brooklyn a two-point advantage.
With the Celtics' offense struggling, Brad Stevens knew he needed a spark. Inserting Tatum into the lineup only three minutes in, the Celtics went on a quick 7-0 scoring run. However, Shamat, who knocked down six three-pointers on the night, responded to Boston’s run, extending the lead to six. After drawing a foul on a three-point attempt on Harden, Tatum in traffic finished a driving reverse layup to cut the deficit down to only two.
Like he did all game, Irving carved through the Celtics defense and came through in the clutch. Knocking down two clutch three-pointers down the stretch, Irving's offense was too much for the Celtics to keep up with. While Smart's return and Tatum's offensive efficiency was encouraging, the Celtics know they'll have to play better to compete with a team of the Nets' caliber.

"It felt good to be back out there with the guys. I just did what I do to try and help my team win games. We've got some things to clean up, but I'm proud of our effort. Shots fell for them that didn't fall for us," said Smart postgame.

The Celtics, sitting at 19-18, hope to snap their seven-game losing road losing streak Sunday against the Rockets. Tip-off is scheduled for 8:00 P.M, and will be available to stream on NBC Sports-Boston.

Game Notes:
The Nets shot 45.2% from deep, while the Celtics shot only 32.5% from beyond the arc. Boston finished with less turnovers (11) than the Nets (14), but were outrebounded 45-39. The Celtics only made 14-of-22 free throws, while Brooklyn knocked down 18-of-22 from the charity stripe.
Ian Carrano
Follow @IC_Sports1