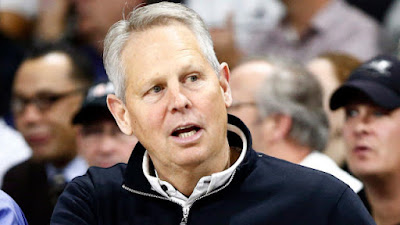 With the NBA trade deadline quickly approaching on March 25, the Celtics may be in no rush to use their $28.5 million exception anytime soon.
Danny Ainge made his weekly appearance on Boston's 98.5 The Sports Hub Thursday morning, prior to the Celtics opening up their second half of the season with a 121-109 loss to the Brooklyn Nets and confirmed that the team's traded player exception will "most likely" be used come the offseason.
"I've always felt that," said Ainge on the "Toucher and Rich" show of the largest TPE in NBA history. Though using some of it prior to the deadline is not out of the question, the Celtics president of basketball operation has not made an in-season move since acquiring Isaiah Thomas from the Phoenix Suns back in 2015.
While Ainge acknowledged that the Celtics' lack of cap space is a major reason that the trade exception probably won't be used on one single player, he didn't seem to care much about what fans would say if he were to stand pat in the upcoming weeks.
"I live in a different world than the world of Twitter," Ainge responded, going as far as saying most trade speculations are "not even real" and the notion that the Celtics not making a deadline move or two last season held them back from making it to the Finals last fall as "ridiculous."

"I didn't know Gordon Hayward was going to get hurt in the first playoff game," Ainge said. "I think we still beat Miami if we're healthy. But that's just part of the game. That had nothing to do with the trade deadline, what we were willing to do or not willing to do…that's not true."

Ainge explained he feels no pressure to make a move and compete with the Nets, who just signed six-time All-Star Blake Griffin to add some depth alongside the trio of Kevin Durant, James Harden and Kyrie Irving. He also mentioned that a trade for a player the Celtics couldn't re-sign long-term wouldn't be made, saying this year's disappointing free-agent market could have the team miss out on players seeking bigger contracts come this summer.
Of course, Ainge said he "would not eliminate doing a deal for this year" and that the phone lines have been "as busy as ever." James Edwards III of The Athletic reported that the Celtics offered "multiple" first round picks for Detroit Pistons forward Jerami Grant, despite the team not actively shopping him.
As for the return of Marcus Smart, who missed 18 straight games with a torn left calf, Ainge spoke about what to expect for the Celtics' second half of the season.

"When we're healthy, I think that our team is a good team," he said. "It should be a fun second half of the year."