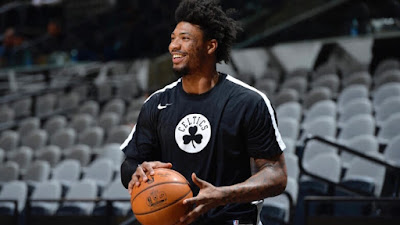 It was a week ago that coach Brad Stevens said Marcus Smart was "getting a lot closer" to a return from a calf injury that kept him sidelined all of the month of February.
On Wednesday, Smart went through a full five-on-five contact practice to which the Celtics guard said "I expect to play tomorrow," following the team's first shootaround since the All-Star break.


The Celtics kick-off the second half of the season Thursday night when they face the Nets in Brooklyn and Smart returns to the lineup after missing 18 straight games with a left calf tear. The veteran sustained the injury back on Jan. 30 against the Los Angeles Lakers and was originally scheduled to miss 2-3 weeks.
Boston, once a top-five team in defense a year ago, has fallen to 19th this season and Smart being out is a huge reason for the drop off. The Celtics were 9-9 in his absence and while they are currently riding a four-game win streak prior to the mid-season break, Smart wants to start fresh with his return.

"I just want us to forget about that first half," said Smart in his Zoom presser. "We have an opportunity to come out and start fresh. We can reinvent ourselves on the defensive end. I just want guys to play with the same intensity I do on that end."

Stevens says Smart will be on a low minutes restriction for "a while" but is not sure exactly what that means between now and tip-off against the Nets.

"I don't know what a while is," Stevens told reporters. "I haven't talked to the training staff yet. I know Marcus said he's good to go, but I haven't discussed specifics with them yet."

Stevens also gave updates on Kemba Walker (knee load management) and Romeo Langford (wrist), as the roster is at its healthiest that it has been all season. On the subject if Walker would continue to not play second nights of back-to-backs, the Celtics coach doesn't think that will change anytime soon despite having six of them scheduled for the rest of the regular season.

"I haven't even thought about that, Stevens said. "I guess I've just been working under the assumption that will be the rest of the way. I guess maybe that could change in May."

As for Langford, who was cleared to practice, but was unable to due to health and safety protocols, there still is no timeline for a return from wrist surgery and is unlikely he will travel with the team to Brooklyn and Houston for the first two games of the second half. The Celtics guard has not played at all this season since rehabbing his injury that he sustained during the playoffs in the bubble last September.
The Celtics could possibly have a clean bill of health come next Tuesday when they host the Utah Jazz at TD Garden, until then, they look to extend their win streak beginning tomorrow night against the new look Nets in a nationally televised broadcast on TNT.