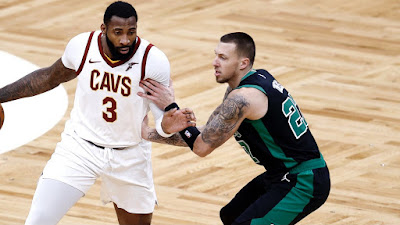 Since trading for Isaiah Thomas in 2015, the Celtics have been quiet at the trade deadline. That all changed yesterday, when Boston acquired Evan Fournier for Jeff Teague and two future second-round picks. They also parted ways with upcoming free-agent Daniel Theis, acquiring Moe Wagner and Luke Kornet in return.
After getting below the luxury tax line by adding Javonte Green to the Theis deal, the Celtics were expected to be active in the buyout market. With a thin front-court, Boston likely will look to address that need with some of the available buyout candidates.

"League sources say Celtics intend to waive Luke Kornet to pursue the centers on the buyout market like Andre Drummond and LaMarcus Aldridge," said Jared Weiss of The Athletic.

Even after the trades, the Celtics still need to clear a roster spot if they expect to sign a player on the buyout market. However, the Boston Globe's Adam Himmelsbach added that Kornet could remain on the team for the moment, with Robert Williams, Tacko Fall and Grant Williams are the only healthy bigs available.

"Was told that the Celtics do not have plans to immediately waive Luke Kornet. With Theis gone and Tristian Thompson still out, they might even need some reinforcements in the short-term," said Himmelsbach.

Although LaMarcus Aldridge was initially on the Celtics' radar, signing him is unlikely as it's reported that he's set to meet with only four teams-- the Los Angeles Lakers, Los Angeles Clippers, Miami Heat, and Brooklyn Nets, according to Chris Haynes of Yahoo! Sports.
With Aldridge likely off the table, that leaves Andre Drummond -- who just negotiated a contract buyout Friday afternoon -- as one of the few options left for the Celtics. Adrian Wojnarowski of ESPN, reports that the former Cleveland Cavalier big man has met with Boston already and they have a "real shot" to sign the two-time All-Star.
In competition with the Lakers, Nets, Knicks, and Clippers, the Celtics were one of the few teams that was granted a meeting. Wojnarowski also added that he believes that the Clippers and Nets have a long shot because Drummond is seeking a bigger role. With Theis out of the picture, that virtually guarantees him a starting role, or at least significant minutes-- something that would be appealing for Drummond who has his eyes set on earning a big pay day next summer.
It's no secret the Celtics have struggled to find production from their bigs, and Drummond can change that. He's one of the best rebounders in the league (13.8), and can score (17.5 points per game)-- both averages Boston's center haven't come close to. Although Robert Williams' offensive game has grown this season, he's only averaging 7.7 points and 6.4 rebounds per contest.
By adding Drummond, the Celtics wouldn't be getting as much production on the defensive end, but his size, rebounding, and inside scoring would prove to be beneficial. Currently Boston has one of the smallest groups of bigs, with Robert Williams at 6-foot-8 being the tallest big man on the roster, before recently acquired Wagner at 6-foot-11 claimed that role.
Competing with big men like Joel Embiid, Giannis Antetokounmpo, Ben Simmons, and Bam Adebayo who has given the Celtics fits through the years, Boston needed to add some size at the deadline. Even though Drummond is more of a traditional big that won't be able to stretch the floor, Boston could still use a physical presence inside that grabs boards and creates shot opportunities in the post when the offense runs stagnant.
It will be competitive as the Celtics need to plead their case against multiple teams with championship contending rosters, but their ability to offer a bigger role could entice Drummond to return close to where he played his college ball at U-Conn, much like Kemba Walker did; signing with Boston only a couple years ago.
It remains to be seen where Drummond ends up, but the addition of the veteran could help bolster the Celtics' big man depth.
Ian Carrano
Follow @IC_Sports1