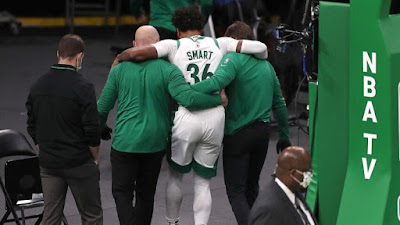 Marcus Smart is reportedly to make his return from a calf strain after the All-Star break and his progress from rehab has been a good one, according to coach Brad Stevens.
Speaking with reporters through Zoom prior to the Celtics win over the Clippers at TD Garden Tuesday night, Stevens didn't get into any details on a specific date for Smart's potential second half of the season debut.

"He's getting a lot closer," Stevens said. "What does that mean? I don't know. It kind of depends, probably, on how the break goes, and how much he's able to get in, and get in with our people. I think he's planning on staying here and doing that."

Smart suffered the calf injury back on January 30 in the team's loss to the Lakers at home, while grabbing for a rebound the Celtics guard fell to the floor holding the back of his leg and many thought it might have been worse than what it originally appeared to be.

"When I stepped back with my left foot after blocking the original shot by Montrezl, when I went to gather, I planted and put all the pressure to load to jump, my calf literally popped," Smart said of his injury last month. "I felt it, I heard it. Then when I stepped forward to jump and when I went to plant to jump up to try to contest his shot the second time, it popped again. That pop just really sent this burning painful sensation down my whole leg.
"So thank God it wasn't my Achilles, anything worse. Thankful for that. Still hurts like hell, but like I said, blessed it was nothing worse."

Smart has missed the whole month of February and last night's matchup for a total of 17 straight games, which the Celtics are 8-9 in his absence.
Stevens noted the Celtics' schedule will allow Smart some practice time to prepare for a return, which could mean he may miss the first game after the All-Star break. Boston will have six days off following Thursday's matchup against the Raptors at home before they face the Nets on March 11. They'll then have two-days off before a demanding two-month stretch of the second half of the season.

"The good news is in our first few days I think we'll practice the Wednesday before we play Brooklyn, and then we've got a couple of days before we play again, and we'll probably practice all three of those days, which would be a little unusual, but that should give him even more of a chance to practice," Stevens said. "And so, anytime after that, then I would assume he'd probably be more ready than not having any practice time.

"Now, that said, I don't know if he'll be that advanced by the time we get back on the practice court."