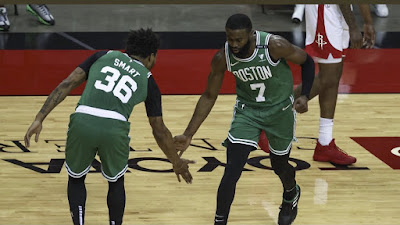 The Celtics bounced back to cruise to a 134-107 win over the Houston Rockets Sunday night at the Toyota Center.
Jaylen Brown had a team-high 24 points on 9-of-14 shooting, while Robert Williams III was a perfect 7-of-7 from the field for 16 points to go along with 13 rebounds to lead the Celtics past the Rockets and hand them their 16th straight loss.

"It was a good win for us," said Brown in his postgame presser. "Everybody is back healthy now. So that was a good confidence booster for us."

Jayson Tatum scored 23 points (9-of-17) and Kemba Walker added 16 points, plus six rebounds and five assists for Boston, who are now 20-18 on the season.
Victor Oladipo finished with a game-high 26 points, while Kenyon Martin Jr., Mason Jones added 21 points and 14 respectively off the bench for the 11-26 Rockets, who haven't won since February 4.
Houston was playing without John Wall and several other due to injuries, while going 16-of-50 from behind the arc.
The Celtics only led by one in the after the first quarter before pulling away to take a 66-53 advantage into intermission. Walker scored nine points during an 11-2 run to start the third period to make it 79-57 lead with 10 minutes left in the period.

"The game rewards you if you approach it the right way, and [Walker] does that for us," said coach Brad Stevens.

"I didn't think were were great early," said Stevens. "They're harder to play big, so we obviously went small the next 42 minutes."

With about nine minutes left to play, Stevens cleared the bench with his team up 112-80 and clearly in control.
The Celtics, who beat the Rockets in Houston for the first time since 2015, will return home to host the league leading Utah Jazz Tuesday night. Tip-off is at 7:30 PM EST on TNT.
Joel Pavón
Follow @Joe1_CSP