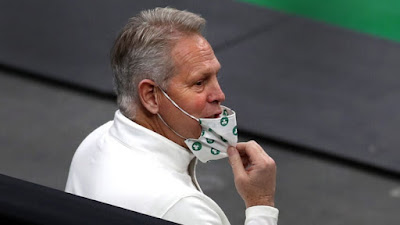 The Celtics are back to a .500 team at 20-20 after falling to the Cavaliers 117-110 Wednesday night for their second straight loss.
On Thursday morning during his weekly appearance on 98.5 The Sports Hub's "Toucher and Rich" show, Danny Ainge didn't shy away about the current state of the Celtics, who are 1-3 since the All-Star break.

"It's been a challenging year," Ainge admitted while also noting that the team has been inconsistent despite some positive wins.
"I don't base it just on wins and losses," said Ainge. "Part of our four-game win streak right before the break was good for us. We needed it for morale, but they weren’t great wins. We didn't play great. I've said this before, but I feel like there are parts of games where we play well in most games. It's just how long that part is. Is it a quarter, a half, is it three quarters?

The Celtics president of basketball operations was pretty straight forward about his team's lackluster performance, especially over the past seven days.

"It just seems like we don't have a lot of characteristics of a really good team, for sure," Ainge added. "We have some talented guys but our team right now is not playing as well as we had hoped."

With the NBA trade deadline a week away on March 25, teams will have up until 3 PM EST that day to complete trades. When asked about what sort of explanation he'd give to Celtics fans if the team stands pat and no moves are made, Ainge said he would "address that next week, and just see what happens and see what opportunities come on."

"This is the week where the heat gets turned up, the people that want to make deals get a little more serious about deals and we'll see," Ainge explained. "I think that's probably a conversation we should put off until next week."

Ainge was also asked if the team was receiving any phone calls regarding trade proposals to which he responded: "The phones have been ringing for the last few weeks. I think it'll pick up this week."