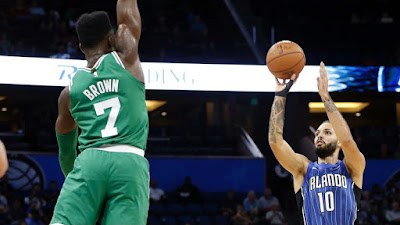 The Celtics released their updated injury report late Monday morning for tonight's matchup against the New Orleans Pelicans.
Jaylen Brown has been downgraded to out due to a left hip contusion, the Celtics All-Star took a few hard falls in Saturday night's win against the Oklahoma City Thunder.


Meanwhile, trade deadline acquisition Evan Fournier has been made available less than an hour after he was originally listed as questionable. The veteran guard will make his Celtics debut since being dealt by the Magic for Jeff Teague and two second-round picks.
Coach Brad Stevens said previously that Fournier would be thrown in the mix and with Brown out, the veteran guard could start against the Pelicans. The former Magic is averaging a career-high 19.7 points per contest this season, while shooting over 46% from the floor and 39% from deep along with handing out 3.7 assists.
The Celtics will also be without Tristan Thompson and Romeo Langford who both remain in the NBA's health and safety protocol. Danny Ainge believes that they could make their return possibly this week. Semi Ojeleye is also out with a left side strain he sustained against the Bucks on Wednesday night, there is no timetable on when he'll be back.
Fournier not only makes his team debut, but will also likely be welcomed by fans who'll be at TD Garden for for the first time this season after over a year. The Celtics begin a seven-game homestand Monday, as tip-off is at 7:30 PM EST.
Joel Pavón
Follow @Joe1_CSP