Marcus Smart happy to be back, despite Celtics' loss to Nets 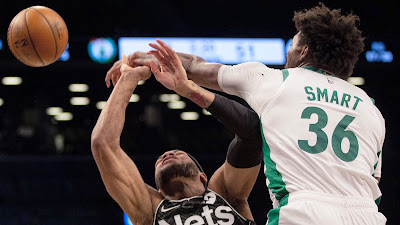 Marcus Smart returned to the Celtics' lineup Thursday night after missing 18 straight games with a left calf tear. The veteran guard's shooting performance helped his teammates keep pace with the Brooklyn Nets for about three and a half quarters before they ultimately lost 121-109 at the Barclays Center.
Even though Smart shot an efficient 4-of-6 from the field (3-of-5 on 3's) and 8-of-9 free throws for 19 points off the bench, Brad Stevens wished he could have played him more than 21 minutes he did off he bench.

"As far as Marcus' minutes, great to have him back out on the floor. The 5-minute stints suck," Stevens said in his postgame presser. "It is what it is. There's only so many ways to manage that, to have any rhythm at all. You want him to be able to end the game and use his versatility defensively. I know he'll be excited when that 20-minute deal is over. But I thought he looked good, I thought he did a lot of good things, and he'll only get better as he gets more used to game action."

Smart said he experienced some first-game nervousness, but he felt good to be back on the floor playing with his teammates after being out for over a month.

Still, Smart is not happy about his minutes restriction but he understands that the Celtics don't want him to re-aggravate his left calf.

"I don't think I'll be on minutes restrictions for long, but as of right now, we're going to take it and keep going with it," Smart said.

While the best Celtics lineup of Smart, Jayson Tatum, Jaylen Brown, Kemba Walker and Daniel Theis have not played much together this year, it's good to have the roster somewhat at the healthiest its been all season.

"Happy for him. Happy to see [Smart] back and healthy," Tatum said in his postgame press conference. "Obviously, we're a better team when everyone's there and healthy and stuff like that.
"I was happy to have him back and just happy to see him back out there, doing what he loves to do."

Smart was also pleased with the effort of his teammates against the Nets, despite the Celtics getting their four-game win streak snapped.

Boston looks to bounce back Sunday night when they face the Houston Rockets on the road.
Joel Pavón
Follow @Joe1_CSP