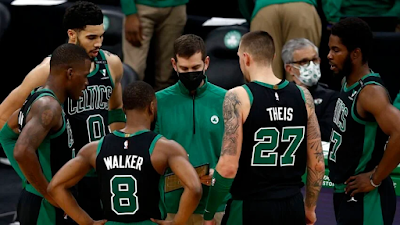 Celtics coach Brad Stevens began his Friday evening confirming he was not leaving the team before a 107-96 loss to the Sacramento Kings at TD Garden.
Despite Boston being below .500 once again at 20-21 on the season, Stevens said he has no plans to return to coach college basketball and more specifically the Indiana Hoosiers men's program; stating he's now a New Englander.

"I'm not a kid anymore," Stevens said during his pregame presser. "I'm a 44-year-old Masshole. I swerve around others when I'm driving, I eat Dunkin Donuts and I root for the Patriots. I'm, unfortunately, skewed in a lot of ways, I guess."

The Celtics didn't help matters much after losing their fourth game in five tries to the 16-24 Kings, falling to 1-4 since the All-Star break. Stevens was visibly frustrated with his roster's performance, as he vented his concerns to the media.

"I think we need to be more engaged in each other," Stevens said postgame to reporters. "I think teams are fragile things, and guys are trying, and they're all really good guys trying, but sometimes even when you're giving good effort or you have a group of possessions that go pretty well, five guys engaged does a lot. And we just haven’t had that recently. And that's, that's concerning.

"We have to play as a team. We have to be able to move past a mistake or a missed shot or a missed opportunity or them banking a shot in from (3-point range), and move on. And show a great mindset, show a little resolve. And put that together throughout the game. We have not done that. That is clear. And our challenge moving forward is the only way that happens is if you do it as a team. So, you got to get engaged in each other. And you need to fight through these tough times. And if you're not going to do that then there's going to be a lot more tough times."

Stevens was asked about possibly shaking things up in the starting lineup for the 18th time (for those keeping count), since the original starters of Kemba Walker, Marcus Smart, Jaylen Brown, Jayson Tatum and Daniel Theis have only played together a total of three times this season. The Celtics coach reiterated how his team needs to be engaged with one another.

"My biggest thing is this, we have a certain ceiling to us if we're not completely engaged in each other," Stevens said. "We got to play well to win. And if we’re not playing well, it's not going to end well."
"You have to be so engaged to win an NBA game that when you're not, you don't. And so we're not," Stevens later added. "That's what we have to fix. The changes, or the lineup changes, or starting lineup, it's got to be 17 guys dying to play well together and I think the fun follows that, right? You share it. You dive on the floor, you rebound, you're tough every single play."

Though Stevens has taken accountability on more than one occasion for his team's play, especially as of late, the Celtics coach made it be known before Friday night's loss; he still enjoys his job even when things get rough.

"Like I said the other day, I'm so grateful to this organization, and to the people here, and for all that they've done for us."

The Celtics look to get back on track when they host the Orlando Magic (14-27) on Sunday afternoon.
Joel Pavón
Follow @Joe1_CSP