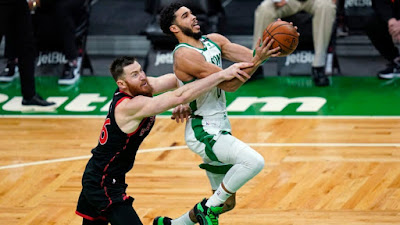 A week ago the Celtics were under .500 and treading water before they completed a four-game homestand sweep Thursday night with a 132-125 win over the Toronto Raptors at TD Garden.
Jayson Tatum led the way with 27 points on 9-of-15 shooting to go along with 12 rebounds and five assists to help Boston at 19-17 close out the first half of the season on a strong note.
Jaylen Brown scored 20 of his 21 points in the second half, while Grant Williams hit 7-of-9 from the field to tally 17 points off the bench and Kemba Walker added 15 points, six assists. Jeff Teague chipped in 14 points for the Celtics, who finished with eight players scoring in double-figures.
Coach Brad Stevens was pleased on how the roster has responded during the last four games, especially after losing nine of the prior 14.

"Any of these four games could have gone the other way," Stevens said. "We have a lot to improve on if we want to be the kind of team we want to be."

Toronto played without starters Pascal Siakam, Fred VanVleet and OG Anunoby, along with Malachi Flynn, Patrick McCaw and head coach Nick Nurse -- plus several members of his coaching staff -- due to being in the health and safety protocols.
Chris Boucher shot 11-of-15, including 5-of-9 from deep before fouling out with 30 points and Norman Powell netted 21 of his 25 points in the first half before also picking up his sixth foul late in the fourth quarter. Terrence Davis scored 22 off the bench, while Kyle Lowry notched a double-double of 14 points and 19 assists for the shorthanded Raptors (17-19), who have lost four of five.
The Celtics trailed at halftime 70-66, but outscored Toronto 35-22 in the third quarter to take a 101-92 advantage into the final frame.
Boston had its biggest lead of the night 121-109 with 4:55 left to play, before the Raptors used a 10-1 run to cut the deficit 122-119 in about a two-minute span. That was the closet they'd get the rest of the night, as the Celtics scored five quick unanswered points, capped-off with a vintage runner by Teague with 1:17 remaining.
Despite Toronto being short-manned, they hit 21 3-pointers, including 11 in the first half and forced nine turnovers (six in the opening quarter) to convert them into 10 points. Boston trailed by as many as nine before outscoring the Raptors 19-14 to end the second period. The Celtics also shot 23-of-40 (58%) in the first 24 minutes, which included eight 3's.

"I think we're learning and growing as the season goes on," Brown said in his postgame presser. "I think we've definitely made improvement in different categories and that's what it's all about."

After shooting over 60% from the field, the Celtics will have nearly a week off before heading to Brooklyn to take on the Nets (24-13) to open up the second half of the season following the All-Star break.

Game Notes:
Boston outrebounded the Raptors 52-37 and outscored them in the paint 54-44. Toronto assisted 36 times on 45 made baskets, while the Celtics handed out 25 dimes on 45 made shots, but also committed 16 turnovers to the visiting team's 14.
It was a high-scoring game for both teams (257 combined points), as the Raptors' bench outscored Boston's second unit 55-51.
Joel Pavón
Follow @Joe1_CSP