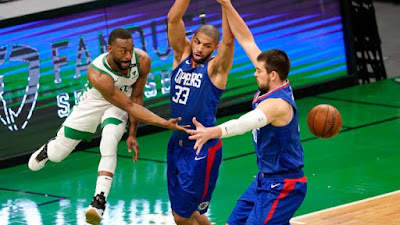 The Celtics are over .500 once again, after beating the Los Angeles Clippers 117-112 Tuesday night at TD Garden for their third straight win.
Kemba Walker came through with another great offensive performance, scoring a team-high 25 points on 8-of-19 shooting and hit 6-of-12 from deep to go along with six assists to lead Boston.

"I'm just playing the right way. Taking whatever the defense gives me. The shots are just falling. That's it," Walker said during his postgame presser. "At the end of the day the overall goal is to win. We've been doing that."

Jaylen Brown returned to the lineup from a sore left knee to finish with 18 points, while Jayson Tatum and Payton Pritchard each added 14 points respectively for the Celtics, who are 18-17 on the season and have won three in a row for the first time in over a month.
Coach Brad Stevens said he's proud of his roster after coming off a stretch that saw the team lose nine out of 14 games before this current win streak.

"They've stayed together when they could have been pulled apart by the noise," he said.

Six Celtics players scored in double-figures and the bigs of Tristian Thompson, Robert Williams III and Daniel Theis combined for 35 points and 23 rebounds on the night.
The Clippers were playing without superstar Kawhi Leonard (back spasms), who was a late scratch just prior to tip-off and former Celtic Marcus Morris (concussion) left the game right before halftime after taking an inadvertent elbow to the back of his head via ex-teammate Brown fighting for a rebound.
Paul George had a game-high 32 points and Reggie Jackson scored 25 points for the Clippers, who have lost five of their last eight and are 24-13 on the year.
In a game that featured 16 lead change and 11 ties, the Celtics took a 91-89 advantage into the fourth quarter and the lead grew to 111-100 on a layup by Tatum with 4:23 remaining.
A 3-pointer by Jackson and free throw by Patrick Beverley got Los Angeles within 113-109 during a quick 9-2 run and 1:53 left to play.
Two possessions later George hit a 3 to cut it to 114-112, before Daniel Theis was fouled and calmly sank two free throws to help ice it and win the season series 2-0.
The Celtics took advantage of Leonard being ruled out and started the game hitting 9-of-10 from the field to take an early 20-13 lead. But George picked up the slack for the Clippers, scoring 21 points in the first half to put Los Angeles in front 63-62 at the break.

"We've just been playing well, playing tough. Not letting little things affect us throughout the course of the game," Walker said of the Celtics trending in the right direction. "That's the difference."

Walker has scored 20 points or more in a season-best four consecutive starts, as the Celtics have one more matchup before the All-Star break on Thursday night when they wrap up their four-game homestand against the Toronto Raptors (17-17). Tip-off is at 7 pm EST.

Game Notes:
Celtics shot 50% from behind the arc on 16-of-32 made attempts and 48.8% overall from the field. Boston outscored the Clippers in the paint 42-32 and won the rebound battle 55-40.
Marcus Smart, who has missed the last 17 straight games with a calf injury, is getting closer to a return after working out prior to the team's tip-off against the Clippers. The veteran guard did some shooting and footwork drills and with three practices scheduled between the first two games following the All-Star break, Stevens said that will give them a better idea of when he could be ready.
Joel Pavón
Follow @Joe1_CSP