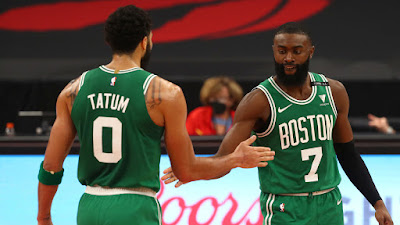 Celtics young stars of Jaylen Brown and Jayson Tatum have been selected to participate in the 3-point contest at All-Star Weekend, the NBA announced Tuesday night.
It was just a week ago that the Celtics duo was named All-Stars, with Brown making his first nod and Tatum set to make a second appearance at the mid-season classic in Atlanta. Now both will have the opportunity to take home some hardware outside of the actual main event this Sunday night.

Quite a 3-Point contest field:

Tatum nor Brown have never participated in this event previously and will be joined by fellow All-Stars Devin Booker Stephen Curry, Zach LaVine and Donovan Mitchell to compete for the 3-point crown.
Brown is shooting 38.9% (ranked third among contestants) from 3-point range this season and spoke about being asked to participate in the 3-point contest following the Celtics' 117-112 win over the Clippers.

"They asked me and I thought it was obvious. They got some of the best 3-point shooters, including myself," Brown said while laughing. "Nah, I mean they asked me to participate and I said, 'Why not?' Dunk contest would've been great if I could have done it. I don't think my body is agreeing with me right now in terms of that. That was something I was looking to do, but I don’t think it's going to work out that way.
"But they asked me to participate in the 3-point contest and I said, 'Why the hell not? Shit, you should have asked me a long time ago.'"

While Brown has missed three games this season due to tendonitis in his left knee, the Celtics wing is looking forward to the weekend in his hometown.
As for Tatum, who is turning 23 years old today, the All-Star forward already has a trophy from 2019 when he won the Skills Challenge competition by hitting a half-court shot to beat the Hawks' Trae Young in the finals. He is shooting a career-low 36.4% from behind the arc -- ranked last among contestants -- after getting off to such a hot start to begin the season.
Kemba Walker, who has competed in both the Skills Challenge and 3-Point Contest, is excited for his teammates but wouldn't make a prediction, only saying as long as one of them is crowned the 3-point champion he'll be satisfied.

"Ahh, we ain't gonna do this," Walker said postgame Tuesday night when asked to pick who would win. "One of them better bring it home though. I ain't picking one or the other."

Sunday won't be the first time two Celtics players will go head-to-head in the 3-point contest, Paul Pierce and Ray Allen reached the finals of the contest before losing to James Jones of the Heat in 2011. Pierce, who won in 2010, and Larry Bird, who won the initial first three 3-point contest are the only players in franchise history to win the event.
The 3-point contest, along with the Skills competition, will take place prior to Sunday's All-Star Game. The slam dunk contest will happen during halftime of the All-Star Game, as TNT will air all of the night's events beginning at 6:30 pm EST.
Joel Pavón
Follow @Joe1_CSP