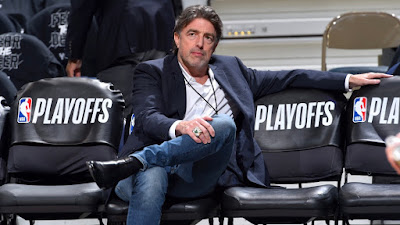 Celtics Governor and CEO Wyc Grousbeck spoke about the current state of the Celtics Wednesday afternoon on Boston's 98.5 The Sports Hub's "Felger and Mazz" show.
Despite the team having a 15-17 record, Grousbeck dismissed any notion that Danny Ainge or Brad Stevens' jobs were on the line, going as far as expressing he still has the up most confidence in both.
Grousbeck gave credit to Ainge for drafting Jaylen Brown and Jayson Tatum, who were not projected to be top-3 picks and has been pleased with the player development of the two All-Stars under Stevens.

"Immediately, either one of those guys would be the top candidate in the league for the job," Grousbeck said during his radio appearance. "It doesn't matter who else is out there. So they are our guys, and we're sticking with them. And it was not even a question in my mind."

The Celtics have no intentions of trading away their two young rising stars in Tatum and Brown, even if they've been blamed for the team's recent struggles.

"I think we've got a roster that isn't a contending roster right now, but it has the makings of something good, I hope," Grousbeck said. "Starting at the top of the roster with the best players, they're keepers, and we're going to keep them."

Grousbeck also mentioned that he's happy with the progress of big man Robert Williams III and rookies Aaron Nesmith and Payton Pritchard that "are developing before our eyes."

"As Doc Rivers found out when you coach a young team, it's a pain in the neck half the time, and you get gray hair, and you have to hope it gets better," Grousbeck said of the current young roster.

When the subject of "tanking" was brought up, Grousbeck simply responded with "We are not trying to do that. That's not us," stating the the Celtics are losing games they're trying to win.
On the subject matter of the $28.5 million elephant in the room known as the team's traded player exception, Grousbeck said that it might not come into play before the March 25 trade deadline and it might be more useful during the offseason due to Tristan Thompson signing the full non-taxpayer mid-level exception that hard capped them back in November.

"Maybe we can use part of it within the hard cap at the trade deadline," Grousbeck said. "And if it's available to us when we want to do it, we'll do it if the right deal is there, but otherwise it's something we'll probably look more to the offseason."

While it also still remains unclear what went down between the Celtics and Pacers when it came to a possible sign-and-trade for Gordon Hayward, where reports suggested at the time Ainge got "greedy" when Indiana offered Myles Turner and Doug McDermott. Boston instead reportedly wanted Victor Oladipo and T.J. Warren before the Charlotte Hornets swopped in and offered Hayward a $120 million deal.
Grousbeck suggested that the media's narrative of Ainge "requesting too much" in return doesn't necessarily paint the whole picture.